Tuesday, September 28
You are at:Home»News»Media company apologises for mixing up Sarawak, Sabah on national day show 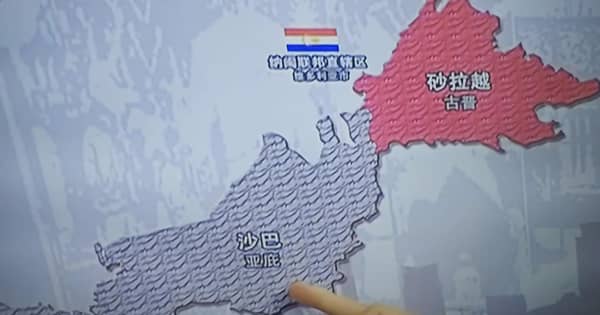 A screenshot of the misleading prop that was aired by a local TV station.

KUCHING: A media company has apologised over a misleading prop which labelled Sarawak as Sabah and vice versa in a special Merdeka Day programme yesterday.

The programme, in Mandarin, was aired on 8TV, which is managed by Primeworks Studios Sdn Bhd.

It was sad to note that this blunder of mixing up Sarawak and Sabah on the prop happened during a programme which was supposedly aired to introduce Malaysia to its audience.

It was unsure what had led to the blunder but fortunately, the hosts of the programme realised the mistake as soon as they unveiled the prop.

Despite their swift correction, video clips on the blunder had gone viral online after the programme was aired.

Many were puzzled as to how a Malaysian TV station could even mixed up the duo, considering that there were only two Malaysian states – Sarawak and Sabah – on the third largest island in the world, Borneo.

One could most probably let the blunder slide if some local TV station had mistakenly labelled the several Peninsular Malaysian states.

But Sarawak and Sabah? Even if one does not know Sarawak is the largest state in Malaysia, it should have been a general knowledge among Malaysians that Sabah was known as Northern Borneo before the state, along with other sovereign States, joined hands to form Malaysia in 1963.