The former minister of finance, Marape became prime minister on May 30 following the resignation of his predecessor, Peter O’Neill.

This marked the end of O’Neill’s nearly eight years in office, and brought to a close a period of policy disputes and defections – including Marape’s own – within government ranks.

In a break with O’Neill’s approach, Prime Minister Marape struck a somewhat nationalistic tone in his first speech to Parliament on May 30, and afterwards told international media that his government would focus on “taking back the economy”, sparking concerns among foreign businesses and overseas investors.

He has indicated he will look to make changes to natural resource legislation, telling Parliament that, at present, “our resource laws are outdated”. In addition, there is a perception that insufficient levels of major project revenue flow back to the government and local communities.

Marape resigned as minister of finance in April, citing his dissatisfaction with the government’s US$13 billion deal to develop the Papua LNG project, led by French multinational Total.

Some analysts have raised concerns that the change of government could delay both the Papua LNG development and expected production increases at the ExxonMobil-led PNG LNG project beyond 2025.

However, as prime minister, Marape has sought to allay such fears, saying that any changes to laws would not be retrospective, and that existing deals would be honoured. He added that significant changes to extractive industry legislation are unlikely to be implemented for some time.

“I am in the business of making huge decisions in as far as the resource laws are concerned,” he said in a June 5 address to the nation.

“But we will do it very slowly. I am looking at 2025, in which we will migrate to a new legislative framework.”

Agriculture will be a particular area of focus in the new government’s policies.

Prime Minister Marape has prioritised the development of processing as a means of boosting earnings for the sector, which accounts for around 25 per cent of GDP and the livelihoods of some 85 per cent of the population.

To this end, the new government has prioritised applying for an EU grant to develop the cocoa industry in the Momase Region.

He has also tentatively lent his support to the proposed US$600 million PNG-China Integrated Agriculture Park Project, on the condition that the development follow “proper economic rationale” and that there be a “return on our investments”.

The organic agriculture subsector has been identified as having particular growth potential, and the new administration is looking to leverage PNG’s location to export produce to lucrative Asian markets such as China, Singapore and Hong Kong.

The prime minister has also signalled his willingness to break with the O’Neill administration’s approach to foreign loans.

On June 26 he announced a commission of inquiry into a US$1.24 billion loan taken out by the previous government.

The inquiry comes in the wake of a leaked ombudsman’s report that indicated nine government officials – including O’Neill and Marape – had engaged in improper conduct.

The investigation relates to a loan from the Australian branch of Swiss bank UBS, which was used to buy 150,000 shares in upstream company Oil Search in 2014. The government’s 10 per cent share was then sold at a loss in 2017 following a collapse in commodity prices. This decision was estimated to have cost the country US420 million

Despite being named in the ombudsman’s report, the prime minister has defended his actions, saying he will resign if found guilty of improper conduct.

Even with ambitious plans to reinvigorate growth in key sectors, Prime Minister Marape begins his premiership at a challenging time for the economy.

Opposition politicians have called on the government to develop a rescue plan for what it has described as an “economic crisis”, while the prime minister has justified his proposed policy reforms by describing the economy as “struggling and bleeding”.

Politicians have drawn particular attention to three key issues: increasing levels of public debt, which rose from 16.3 to 36.9 per cent of GDP over the course of O’Neill’s tenure; a heavy reliance on extractive industries; and concerns related to the health and education sectors.

To help address some of the fiscal concerns, Prime Minister Marape is seeking to restructure many of the country’s state-owned enterprises (SOEs) to improve their financial efficiency. He has even flagged the possibility that some enterprises could be privatised, with the profits of SOEs expected to go towards the creation of a sovereign wealth fund.

Meanwhile, the need for further economic diversification was highlighted last year following the earthquake that struck Hela Province in February. In addition to claiming the lives of around 200 people, subsequent damage to industrial infrastructure halted production of major projects such as the PNG LNG plant and the Porgera gold mine for several months.

As a result, the economy recorded zero per cent growth last year, according to the IMF.

However, despite some negative sentiment, growth prospects for the next two years remain strong. The IMF forecast GDP would expand by 3.8 per cent this year and by 3.1 per cent in 2020. Meanwhile, in a more bullish outlook, the World Bank predicted PNG’s economy would grow by 5.1 per cent and 3.1 per cent, respectively. 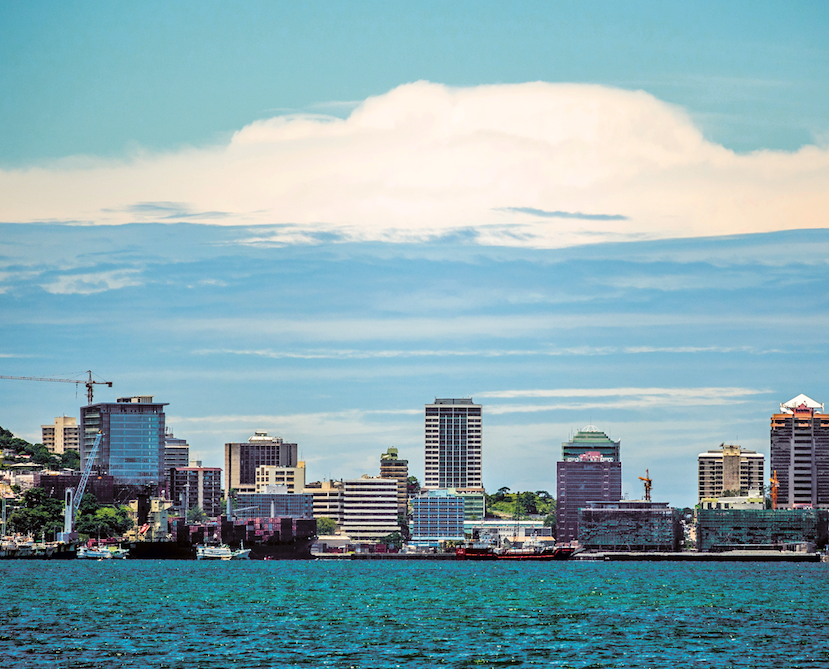