Saturday, August 15
You are at:Home»News»Flight diverted to Miri after passenger shows sign of labour 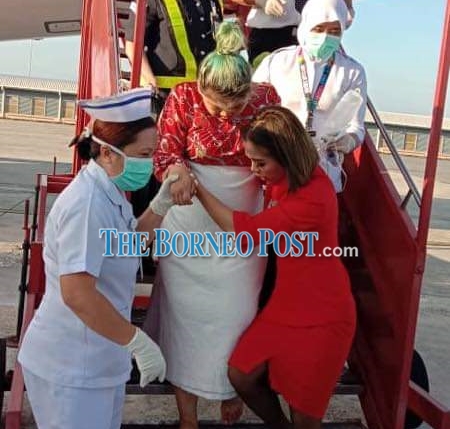 The heavily pregnant passenger is being assisted by a nurse and cabin crew to disembark from the aircraft.

MIRI: A domestic flight that departed from Kuala Lumpur for Sandakan was forced to be diverted to Miri yesterday after a heavily pregnant passenger showed sign of labour.

The flight AK 5194, which was carrying 130 passengers and six cabin crews touched down at Miri Airport at 5.28pm.

Upon arrival, the passenger was brought to Miri Hospital for medical treatment using an ambulance which was already on standby.

According to Miri Airport manager Zainal Abidin Harun, the passenger who was from Sandakan, was heading home from Kuala Lumpur.

It was reported that the mother had safely given birth to a baby boy at Miri Hospital at 5.58pm.

The aircraft departed for Sandakan at 6.27pm without the passenger.