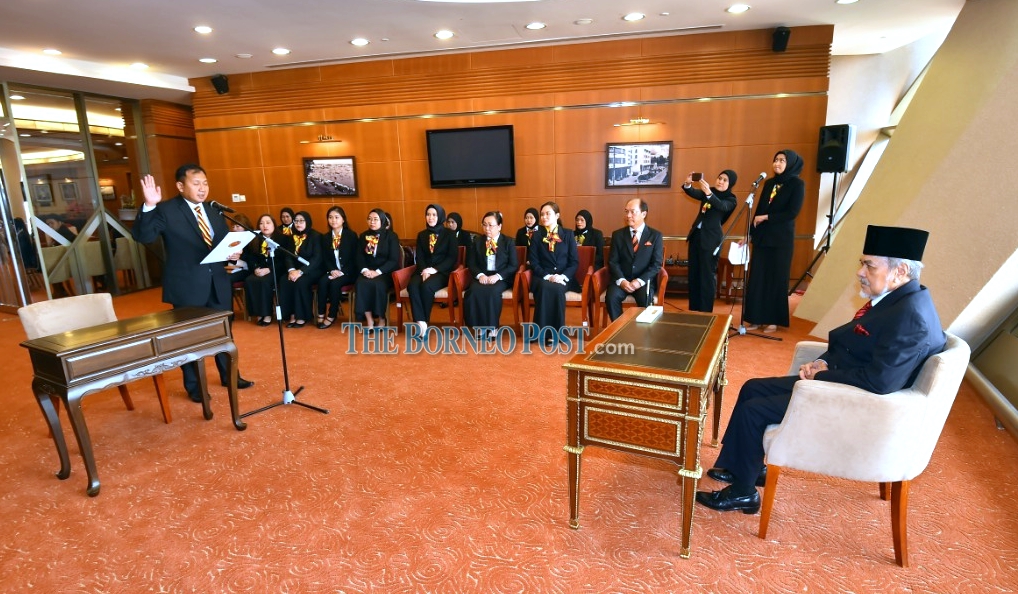 Pele (left) taking his oath of office in front of Awang Asfia during the ceremony.

KUCHING: Pele Peter Tingg, the son of the late Dato Sri Peter Tinggom, today takes his oath of office as a secretary of the State Legislative Assembly (DUN).

The swearing in ceremony, which took place on Level 7 of the new DUN complex, was witnessed by DUN speaker Datuk Amar Mohamad Asfia Awang Nassar.

According to a statement from DUN, the appointment is in accordance with Article 22A of the Constitution of Sarawak.

Pele, 48, began his career in the private sector, working with a legal firm in Kuching and a dealer representative with Kenanga Investment Bank from 1998 to 2011.

He joined the state civil service as an assistant secretary at State Financial Secretary office in February of 2002.

He continued his career in the civil service in 2004 at the Ministry of Public Utilities, Regional Corridor of Development Authority (Recoda) and the Prime Minister’s Department in Putrajaya and the Ministry of Utilities.

Pele has also served as a Parliamentary officer from July 2009 to January 2010 and DUN deputy secretary from February 2011 to May 2015.

Hailing from Saratok, he graduated in 1996 from Anglia Ruskin University (formerly known as Anglia Polytechnic University) UK with a Bachelor in Laws (Honours) degree.

He also received a Diploma in Management (Executive) from the Australian Institute of Management (AIM), Western Australia University in 2002, and passed the examination in Accounting, Financial Statement Anlaysis & Asset Valuation from the Securities Commission of Malaysia in 2000.

Recently, he successfully completed the Certified Integrity Officer (CeIO) programme under the Malaysian Anti- Corruption Academy and was appointed as a certified trainer for the National Anti Corruption Plan (TOT-NACP) by the Integrity Institute Malaysia.