Wednesday, April 8
You are at:Home»News»Sarawak»‘Weed problems to worsen due to environmental changes’ 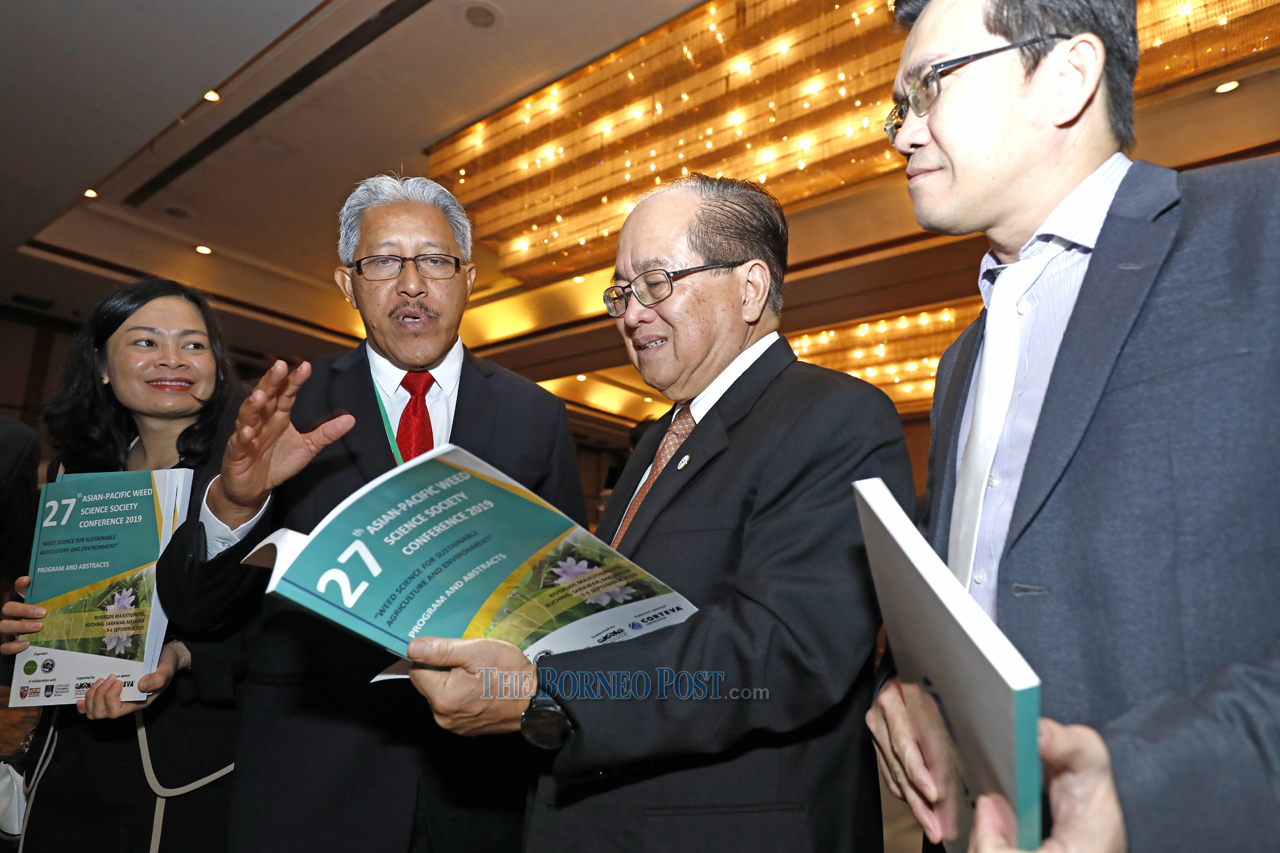 Abdul Shukor (second left) explains the details of the conference to Uggah (second right). — Photo by Chimon Upon

KUCHING: Weed problems will worsen in the next 10 to 20 years due to global environmental changes, requiring future weed management efforts to be more innovative and holistic for sustainable intensification of crop production and environmental conservation.

“Weeds compete with crops for the same resources such as water, nutrients, light, and carbon dioxide. Furthermore, some species are alternate hosts for crop pests and pathogens. These factors have resulted in reduced agricultural productivity in terms of quality and quantity, and increased external costs.

“Globally, crop yield losses to weed infestation were estimated at about 9 per cent, while in developing countries weed control may claim up to 50 per cent of farmers’ time,” he said in a speech prior to opening the 27th Asian Pacific Weed Society Conference here on Tuesday.

The Minister of Modernisation of Agriculture, Native Land and Regional Development said the theme ‘Weed Science for Sustainable Agriculture and Environment’ is relevant and in sync with the current focus in agriculture, which is keeping up productivity in ever-limiting resources and unpredictable climatic conditions.

Despite the negative impact of weeds on crops, the environment, livestock, and humans, he pointed out there are some beneficial uses of weeds given comprehensive research and development.

“As most of you here are aware, many weeds produce luxuriant leafy growth. These leafy components when used as green manure could recycle a considerable amount of organic matter and plant nutrients, hence improve soil fertility. Some studies suggest that about five to 15 tonnes of green matter per ha may be added depending upon weed species and their growth habit.

“As for crop protection, weeds such as the Crotalaria species and Calotropis species were reported to contain nematicidal properties. Incorporation of their residues to the soil could help to ameliorate problems with nematode infestation,” he said.

He added that some weeds are being exploited as fodder for animal and food for humans based on their good palatable taste and nutritional content, citing examples of leafy plants such as Amaranthus polygamus and Portulaca oleracea that are being consumed as vegetables.

“As we are new in the era of industry 4.0, I am glad to note that some of you in this conference room are already into precision weed management through use of remote sensing, drones, and Internet of Things (IoT).

“Technologies are already available on application of robotics and machine vision for weed detection and removal. These digital technologies could revolutionise weed management leading to year 2050,” he said.

Uggah encouraged conference audience, as experts in the subject, to share their knowledge with others.

“I also wish to propose that more research on the positive aspects of weeds be conducted to further explore the potential of these unwanted plants.

“There is a need for trans-disciplinary research collaborations among stakeholders to explore alternative and cheaper innovations for control of weeds that can be readily adopted by the farming communities,” he said.

A total of 243 weed scientists from 24 countries are gathered for the conference jointly organised by the Asian-Pacific Weed Science Society (APWSS) and Malaysian Plant Protection Society (MAPPS).

“Weed infestation in the farm without proper control measures could reduce yield up to 90 per cent.

“The conference covers a wide range of very interesting topics related to weed science with 12 sub-topics to be discussed. During the next few days, participants will deliver a total of 111 oral and 68 poster presentations,” said APWSS president and conference organising committee chairman Prof Dr Abdul Shukor Juraimi.

The conference focuses on developments in the science of weed management and discusses challenges faced by researchers, practitioners, and consumers on problems relating to weed management.