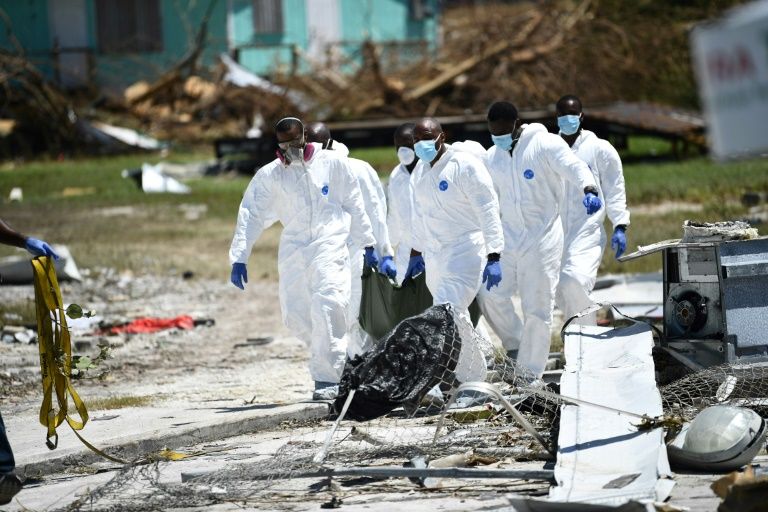 A removal team carries a victim in a body bag on Great Abaco island in the Bahamas. AFP Photo

BAHAMAS: In the desolation left after Hurricane Dorian carved a murderous path across the northern Bahamas, six men dressed in immaculate white overalls zip a corpse into a body bag.

Hands and face protected by latex gloves and masks, they hoist their grim discovery onto an old flatbed truck alongside other victims, hopping on board themselves.

The truck makes its sad journey through Marsh Harbour town on Abaco Island along a route where almost every building has been damaged.

Going door-to-door, the team carries out the grisly but vital task of removing the dead from flattened houses, working in brisk winds that offer a faint reminder of the ferocious storm that reduced much of the island to rubble and left at least 20 people dead.

They collect one body from among several shipping containers thrown around by the hurricane’s destructive force.

Keen to reassure his family in the US, one survivor watching the body collection tells AFP: “We are doing great — Gilbert in Miami — we are going great.

“It is just the place is messed up but we are doing fine, we are doing okay, your brothers and sisters are okay,” he said.

The blue, sun-kissed skies more usually associated with a tropical paradise have returned, yet a glance across Marsh Harbour offers up nothing but horror — the grim aftermath of a cataclysm.

“There was a big two-story building over there,” says former fire chief Norwell Gordon, gesturing, walkie-talkie in hand, to a sea of rubble punctuated by the occasional half-standing facade or twisted vestiges of an electricity pylon.

“It knocked off the top of this,” Gordon adds, pointing to another concrete building reduced to little more than its front entrance and ground floor walls.

As far as the eye can see, buildings have been reduced to splintered wood, trees stripped of their branches. Low-lying areas stagnate under flood water as householders stack damaged sofas, cupboards and piles of clothes in their front yards.

Two young men frantically pull suitcases on wheels as if trying to outrun ghosts, or perhaps in search of them.

The death toll appears mercifully low set against the destruction visible in every direction, but Bahamian Prime Minister Hubert Minnis expects the number to rise.

Much of Great Abaco island remains inundated, making emergency access difficult. Hundreds of boats — smaller dinghies and large trawlers — lie on their sides or flipped like pancakes onto their decks, supine and abandoned to their fate by the receding ocean.

Powerful gusts of wind have twisted away the pillars holding up a gas station roof, as if they were chicken wire. 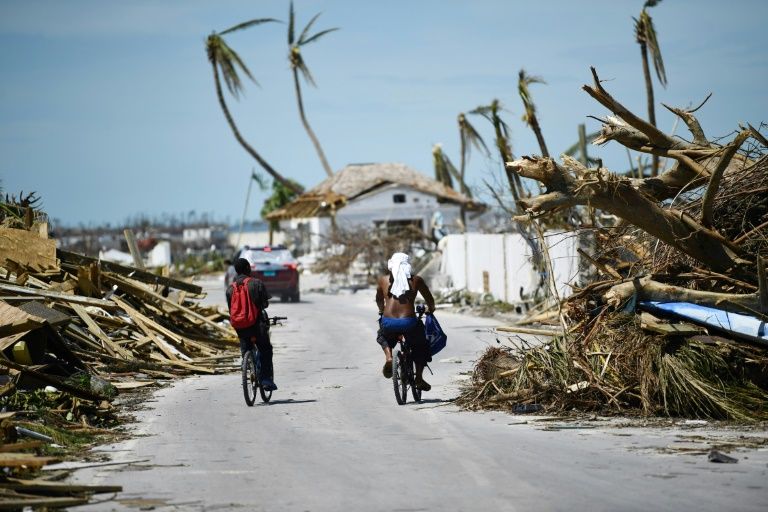 As far as the eye can see, buildings have been reduced to splintered wood, trees stripped of their branches. AFP Photo

The awning has been blown a few dozen yards (meters) away and fuel pumps ripped from the bitumen lie scattered like dominos.

Some householders have collected their belongings and piled them into pick-ups in search of safer shelter.

Severed power lines dangle forlornly, although the chances that any of them are still live seem distant. It will take months to recover and probably years to restore the island to anything approaching normality.

“We need to get out of here, man,” says Brian Harvey, a Canadian trapped in the Bahamas by the hurricane and desperate for a place on a helicopter.

After Dorian struck, he found refuge in a relatively unaffected house, along with other survivors.

“It’s a mess but at least we have a generator that we open every three hours so we can have electricity and keep our food in the fridge and eat and everything,” Harvey tells AFP.

“We’re the lucky ones, but it’s hell everywhere.” – AFP

Previous ArticleCould the Loch Ness monster be a giant eel?
Next Article Man arrested for possession of RM9k worth of drugs in apartment carpark