Wednesday, July 15
You are at:Home»News»Sarawak»SMC, KRDC urged to work together to make Sibu great

The councillors in a photocall with Dr Sim (seated seventh left), flanked by Ting (sixth left) and Bakrie, and other dignitaries.

SIBU: Sibu Municipal Council (SMC) and Sibu Rural District Council (SRDC) are urged to work together to make Sibu a great place in terms of development.

Minister of Local Government and Housing Datuk Dr Sim Kui Hian said both councils should plan for the future instead of looking back at Sibu’s past achievements. 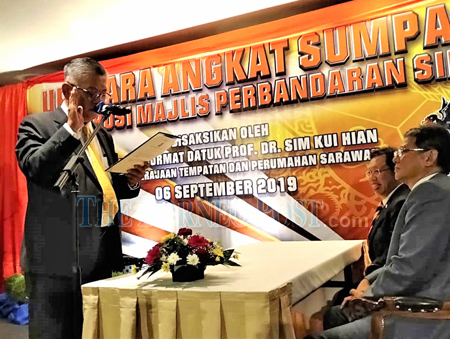 Ting takes his oath of office before Dr Sim (second right) and Bakrie.

“There must be a plan in place to make Sibu great, and it must involve both SMC and the SRDC.

“Take into consideration that the demographic has changed and so too is the needs of the people in this modern times,” he said at the swearing-in ceremony of SMC new chairman Clarence Ting Ing Horh here yesterday.

Dr Sim said both councils should come up with people-centric policies that could solve their problems, and not policies that penalise them.

Citing an example, he said the use of smart traffic light or the employment of traffic wardens could help to get more people home early from work.

“If the traffic flows smoothly and the people can get home say 30 minutes earlier, it can make a huge difference for them and their families, he said.

He said traffic congestion was not only happening here but all over Sarawak, including Kapit.

He thus said that all councils should start with traffic warden to help the police in reducing traffic jam.

On councillors, he said they played an important role in policy-making for the local residents.

Dr Sim also thanked the former chairman of SMC Datuk Tiong Thai King for his huge contribution over the years.

Permanent secretary to the Ministry of Local Government and Housing Bakrie Zaini, Temengong Dato Vincent Lau, and Datuk Tiong Thai King who is also Dudong assemblyman, and other councillors were also present at the swearing-in ceremony.