Thursday, August 13
You are at:Home»News»UPSR to continue despite rising API with students required to wear face masks, schools will close if API breaches 300 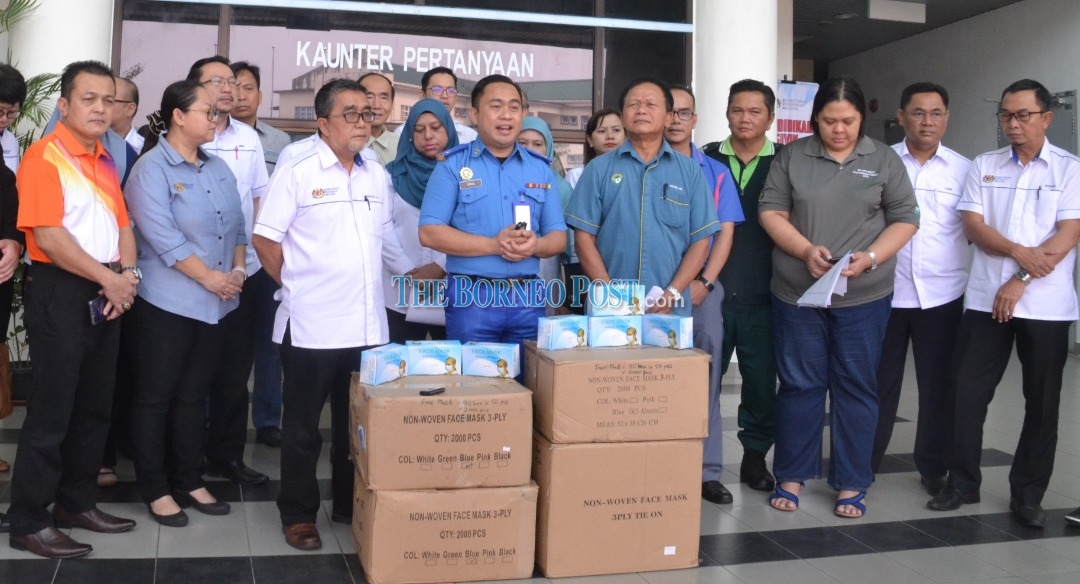 Ismail (front, center) alongside Abang Mat (front, left) and Justine (front, right) addressing the press during the presentation of the face masks.

KUCHING: The Ujian Pencapaian Sekolah Rendah (UPSR) public examination is scheduled to continue as usual despite the ongoing haze situation in the state, and pupils will be required to wear face masks while sitting for the exam.

To ensure that the exams proceed, a total of 200,000 face masks have been handed over by the State Disaster Management Committee (JPBN) to the state Education Department.

“If the API reading is more than 100, our officers will instruct the examination prefects in ensuring the pupils wear their face masks. When the API level reaches more than 200, schools will be closed and students are not required to come to school (except those sitting for UPSR),” deputy director of the state Education Department Abang Mat Ali said.

“Should API levels reach more than 300, schools will be closed completely.”

According to JPBN secretariat chief Major Ismail Mahedin, this was done to ensure he department’s readiness in facing the haze, especially during the UPSR examination.

He remarked that the committee had decided to present the masks to the department after a meeting held last night.

“These face masks will be handed over to areas that are greatly affected by the haze, with Air Pollutant Index (API) readings of more than 200.

“Areas affected include Kuching, Samarahan, Serian and Sri Aman and these masks will be distributed in stages,” Ismail said at a press conference held prior to the symbolic handover of the masks at the state Education Department’s office in Jalan Bako, Petra Jaya here today.

With regards to the current haze situation in Sarawak, Ismail said the API levels in the state have increased daily.

He remarked the Department of Environment have reported there were 1,087 hotspots in Kalimantan as of yesterday due to the hot and dry weather currently affecting Borneo.

“In the state especially in Kuching, there are five hotspots detected as of yesterday. As of 10am today, the API level reached 210 (very unhealthy) and this can affect the public health,” he said.

Natural Resource and Environment Board (NREB) controller Justine Jok advised members of the public to refrain from doing any illegal open burning during the haze as it can greatly affect the air quality.

He asserted that permits to conduct open burning was halted since April this year as the board was informed by the state Meteorological Department of the hot and dry weather currently hitting the state.

“For our enforcement, we have a system whereby we are assisted by satellite (images) where we can decide and pinpoint the possible hotspots (in Sarawak). From there, we will take immediate action.

“Should open burning be done in plantation areas, then it is already an offence. If it is done outside of the area, then we have to decide on who owns the land – either it is a state land or a Native Customary Rights (NCR) land as we have procedures to deal with it.

“We will continue our patrols and our enforcers will be on the ground to search for any illegal open burning activities done throughout the state,” Justine said.

Data released by the Department of Environment (DOE) as of 1pm today showed Kuching station recorded a very unhealthy API reading of 215.