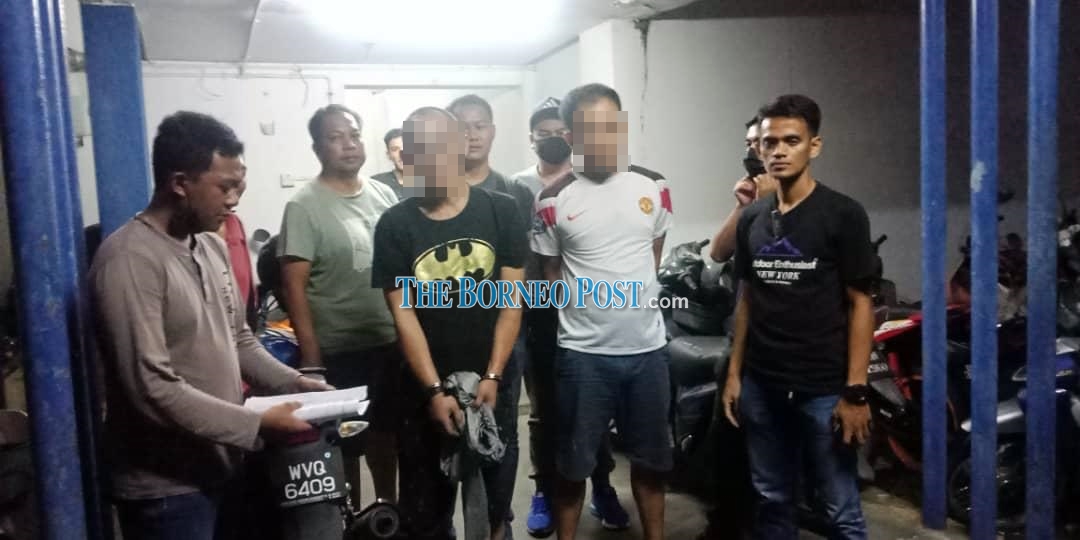 The two suspects were surrendered to the police after being apprehended by the Stapok Community Policing Unit last Saturday.

KUCHING: Two men, who were suspected to be involved in house break-in and theft at a house in Star Garden, here were apprehended by the Stapok Community Policing Unit last Saturday before they were surrendered to the police.

According to him, the house owner received an information that his house was broken into by thieves at around 3pm on that day.

Upon arriving at the house, the house owner found that the gate was forced open and his house was ransacked.

“The house owner then checked the closed circuit television (CCTV) (in his house) and spotted two unidentified men, who were using a white saloon car, breaking into his house, ” said Awang Din in a press statement today.

Awang Din said the house owner then shared the CCTV recording in the Stapok Community Policing Unit ‘Wechat’ and was informed by the members that the car was still in Stapok area.

“The house owner went along with 10 others from the unit and apprehended two of the suspects, while the other two accomplice managed to escape,” he added.

Awang Din said police had also confiscated the stolen items, including the white saloon car, which was reported stolen.

Prior to breaking into the house, Awang Din revealed that the suspects had attempted to break-in into a house at Poh Kwong Park here but failed after the house owner saw the suspects and shouted at them. The suspects then escaped using the white saloon car.

“Checks conducted on the two suspects found they were involved in numerous drugs cases in and around Kuching and Padawan and one them has a criminal record for theft,” he said.

Awang Din said the suspects have been remanded to enable the police to conduct further investigation.

Previous ArticleThree Chinese independent schools in Kuching to be temporarily closed due to escalating API
Next Article Uggah: Cloud seeding can only be carried out earliest on Thursday