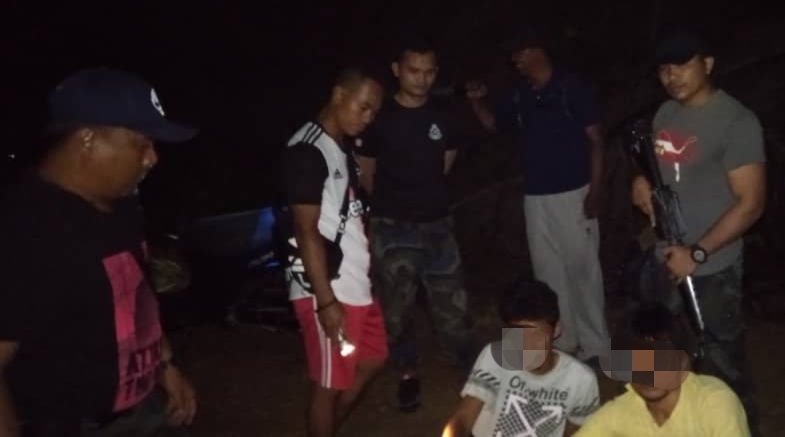 Two of the suspects being detained by the GOF strike force team.

TAWAU: Battalion 14 of the General Operations Force (GOF) here have detained four illegal immigrants for drug abuse and another for possession of a homemade shotgun (bakakuk) together with a live shell on Sunday.

ESSCom commander, DCP Datuk Hazani Ghazali, said, acting on information from the public, the strike force team detained the suspects, aged between 22 and 41 years old, at the Mile 4 junction of Kalabakan Road at about 8 pm on Sunday.

He said, the 3 motorcycles used by the five suspects from separate directions were stopped and checked and during a body search, a plastic packet believed to contain syabu and a live shotgun shell were found on one of the suspects’ sling-bag.

Further checks revealed that the suspects did not possess any identification documents with four of them testing positive for drug abuse.

Hazani said, the suspect with the live shotgun shell then showed the strike force team where the ‘bakakuk’ was kept together with two more live shells at a bush near an oil palm plantation not far from the area.

He said all the suspects were brought to the Tawau police headquarters for further action and the case will be investigated under the Immigration Act 1959/63, Dangerous Drugs Act 1952 and Firearm Act. Also seized were the 3 motorcycles used by the suspects.