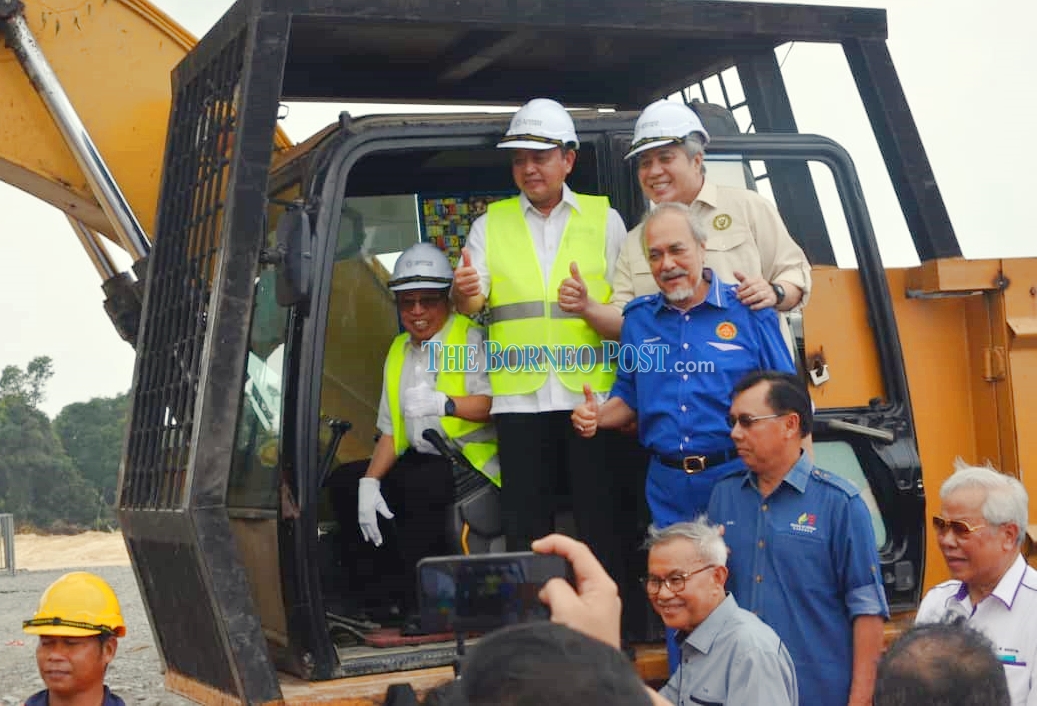 Abang Johari flanked by other guests flash a thumbs-up at the groundbreaking ceremony of the Sarawak Petchem Methanol project.

BINTULU: The Sarawak Petchem Methanol project in Tanjung Kidurong Bintulu will be a catalyst to further transform Bintulu from the current world-renowned LNG gas producer to a petrochemical hub with a future downstream value-added integrated petrochemical complex.

Chief Minister Datuk Patinggi Abang Johari Tun Openg said the development of the petrochemical industry would be a major economic engine of growth for Sarawak in the next five to 10 years.

“This will add multiple values to our natural resources which will benefit the state economically, derived through its value chains,” he said during the ground breaking ceremony of the proposed Sarawak Methanol Project here in Tanjung Kidurong today.

According to the chief minister, the methanol and derivative project is one of the two initiatives of the Sarawak government as it embarks on enhancing its manufacturing sector.

The other planned project is an ammonia and derivative plant.

“Established in June 2017, Sarawak Petchem will be the first Sarawak state owned company that produces methanol, with an annual capacity of 1.7 million metric tons per annum (mtpa).

“The decision for the establishment of Sarawak Petchem is timely due to the abundance of natural gas as feedstock for the development of a mega Methanol Plant.

“The plant is expected to come on-stream in 2023 and will receive 160 million standard cubic feet per day (MMSCFD) of natural gas feedstock from Petronas,” he said.

This project marks another significant milestone, not only in the quest to industrialise the state, but more importantly the realisation of the state’s own vehicle to venture into the oil and gas industry, particularly in the downstream petrochemical sector, Abang Johari revealed.

At the same time, he said the project will generate job opportunities, both during the construction of the mega project which is anticipated to have a total workforce that could reach 4,000 workers, and about 300 staff during the operation of the plant.

Abang Johari said with state of the art and high technology, the plant will require competent personnel, who are mostly engineers, technicians, operators and specialists to operate it, thus providing employment opportunities for potential job seekers.

“Now it is the policy of the state government that any new finding of gas resources in Sarawak, 40 to 50 per cent must be retained as feedstock for industries in the state,” he said.