Sunday, February 28
You are at:Home»News»‘Proposed methanol plant a major milestone for Sarawak Petchem’ 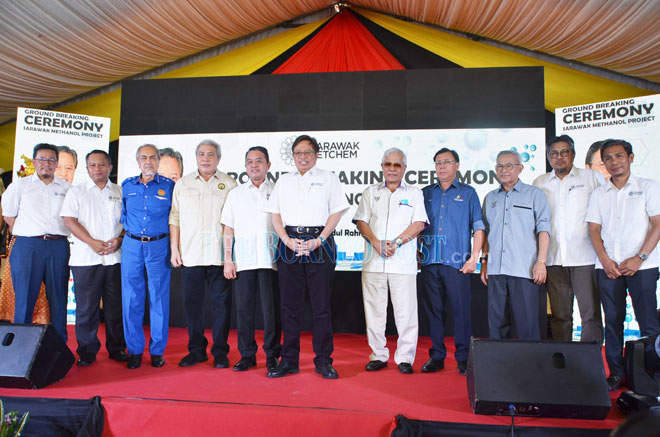 BINTULU: The ground-breaking ceremony of the methanol plant project at KM3 Jalan Similajau in Tanjung Kidurong here marks the first step in the realisation of the development and construction of the state’s first mega methanol plant and second in the country after the one in Labuan.

In stating this, Sarawak Petchem Sdn Bhd chairman Tan Sri Datuk Amar Abdul Aziz Husain said the project is an important milestone and achievement in its journey to pursue the realisation and involvement of a Sarawak-based company in the petrochemical-downstream of oil and gas industry in Sarawak.

“With this groundbreaking ceremony, Sarawak has created history by becoming the first state in Malaysia to build a methanol plant that is not owned and managed by Petronas.

“We are currently at Phase 2 – detailed feasibility study which takes about seven months to complete. We are expecting to make our final investment decision scheduled for early first quarter of 2020,” he said yesterday after Chief Minister Datuk Patinggi Abang Johari Tun Openg performed the ground-breaking of the plant.

According to Abdul Aziz, the project engineering and construction is expected to start by second quarter of 2020 with final project delivery targeted by the end of the fourth quarter of 2022.

Sarawak Petchem was formed on June 7, 2017 with the primary objective to undertake, develop and operate the first methanol plant in the state.

He said the proposed methanol plant, once in full operation, is expected to produce 5,000 metric tonnes per day or 1.7 million tonnes per year of methanol product by using 160 million standard cubic feet per day of natural gas as feedstock to be supplied by Petronas.

The first commercial production of Sarawak Petchem Methanol Plant is expected in early 2023 at the latest, he added.

The project will utilise the land that has been allocated by major shareholder Yayasan Hartanah Bumiputera Sarawak which, jointly with Sarawak Economic Development Corporation (SEDC), currently owns 100 per cent of the project and acts as the project sponsor.

“The site for this methanol project, covering an area of about 100 acres, was chosen after careful consideration of a number of factors, the most critical of which is its proximity to the natural gas supply in Bintulu,” he explained.

Abdul Aziz said to build the plant elsewhere would mean having to construct a new gas pipeline which can substantially increase the cost of the project.

Furthermore, he said because of land and other issues, the delay in the construction of the pipeline may cause further delay to the project.

He pointed out that for this project, time is critical as any delays will not only result in cost overruns but also loss of opportunity in revenue and profit.

“I was given an assurance by Samsung Engineering Co Ltd, a world-class EPC (Engineering, Procurement and Construction) company that the plant will be delivered within 36 months. The plant is therefore scheduled to be completed by the end of the fourth quarter of 2022,” he said.

He pointed out that while Sarawak Petchem is excited with the historic event, the company is fully aware that the journey ahead is still very daunting, fraught with challenges and rigorous tests.

However, Abdul Aziz assured that the plant will complement the Sarawak government’s aspiration to turn Bintulu into a downstream petrochemical hub.

“This methanol plant is expected to become the catalyst for future growth of oil and gas downstream derivatives industries in Bintulu.”

These downstream activities, he said, will contribute to make Bintulu a vibrant and dynamic town where both investors and local small and medium enterprises can take part in the growing manufacturing activities based on methanol and its derivatives.

“As we speak, a few serious methanol buyers have indicated their willingness to invest in downstream methanol derivatives utilising methanol from our plant.

“The spin-off of this project will not only benefit people in Bintulu but all people in Sarawak as it creates employment, and also enhances the value of our natural resources,” he said, adding that SEDC is also planning to develop an industrial hub adjacent to the methanol plant to cater for these new industries.

Abdul Aziz said this marked a very significant long-term collaboration between Petronas and Sarawak Petchem, where Petronas Chemicals Marketing Labuan will act as its marketing arm to market the product for export, to leverage on their marketing expertise and know-how on the world market for methanol.

“Similarly in this coming fourth quarter of 2019, we expect to ink two important deals with Petronas – the signing of Gas Sales Agreement (GSA) for the supply of natural gas as feedstock for our methanol plant and signing of memorandum of agreement with Institut Teknologi Petronas to equip and train our future plant operators and technicians to run the proposed plant,” he said.

Previous ArticleRepair of 37 schools to be tendered out by Dec, says CM
Next Article Youths urged to acquire skills in facing IR4.0