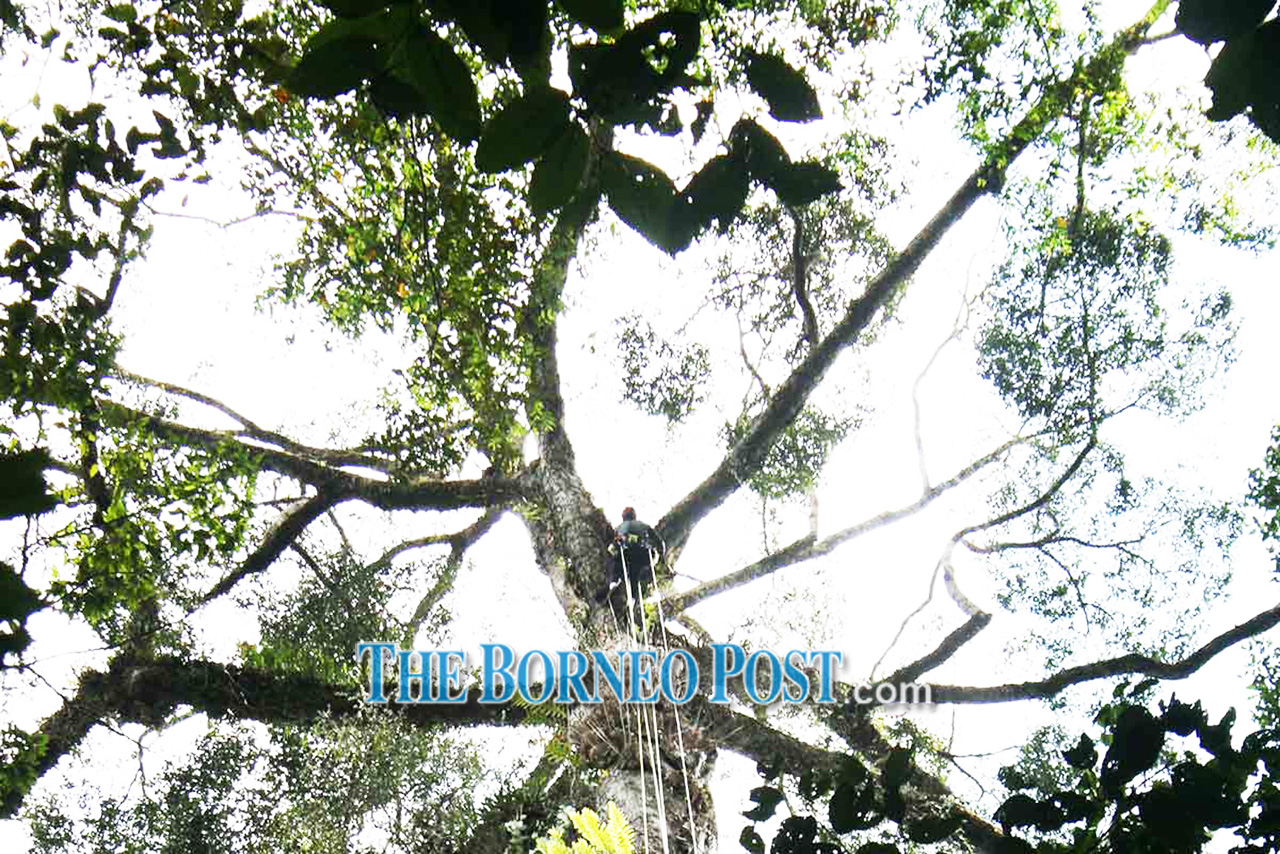 Yellow Meranti is the tallest species of tropical tree in the world.

WHAT in common have the Petronas Twin Towers in Kuala Lumpur and the Yellow Meranti dipterocarp tree at the Danum Valley Conservation Area (DVCA)? The former was designed by the late Argentinian architect Cesar Pelli and is still the tallest twin tower structure in the world at 451.9 metres from ground level. The latter, through the research work of Malaysian and UK scientists had, in January, been declared as the tallest species of tropical tree in the world, standing at 100.8 metres from where its buttress roots enter the ground to the very top of its canopy.

You may well have guessed that one was through mankind’s ingenuity and head for heights and the other was nature’s way of emerging through layers of forest vegetation to reign aloft and aloof.

Both structures, manmade and natural, have other similarities. This species of Yellow Meranti (Shorea faguetiana) has been named ‘Menara’ which, in etymological terms, comes from the Old Malay word ‘menarah’ meaning steeple, minaret, or tower as derived from Hindi and Arabic, with reference to minarets on, respectively, temples and royal mosques. Interestingly, Pelli designed the shape of each of the twin towers with such thoughts in mind. From a distance, the Petronas Twin Towers resembles a series of minarets.

For many a year, Borneo has held the record for the location of the highest species of Yellow Meranti trees. Until 2016, the highest of these species was measured at Tawau Hills National Park (THNP), Sabah at 88.2 metres. In that very year, there was the discovery of another yellow Meranti tree, Minecraft, at 89.2 metres high in the Maliau Basin Conservation Area. This added another metre in height yet to be outstripped later that year by an even taller tree named Lahad Datu at the DVCA at a height of 95.2 metres. In May 2018, a Yellow Meranti was recorded at 96.9 metres in the THNP. Today, ‘Menara’ literally stands supreme at Danum Valley.

The research scientists who discovered Menara were based at the Danum Valley Field Centre, which my late wife and I visited in 1999. Then, we were amazed at the international composition of the research scientists from many disciplines including undergraduates and postgraduates. The following year, I took a group of 26 senior secondary school students from my school in the UK to visit that field study centre one afternoon. They clambered up, within a protected climbing frame, into the canopy of a mengaris or tualang tree and were shocked by its height, slender trunk, buttress roots, and the view from the canopy, let alone the opportunity to talk with such dedicated scientific staff.

Such an inspirational experience saw many of these students later gaining university places to read Geography or Biology. Now, nearly 20 years later, many of these former students are teachers, university lecturers, or doctors.

How was this angiosperm and the world’s tallest flowering plant located?

Danum Valley’s Menara is sited at a height of 436 metres above sea level, on a 33 degree angled slope with a beneficial aspect, in a sheltered valley beneath a forested ridge. Initially a drone was used to fly over the emergent trees’ canopies with this particular tree seen standing head and shoulders above all others.

This particular tree was located early in 2018 by a research expedition led by Dr Doreen Boyd of the School of Geography, Nottingham University. In Augu st 2018, measurements were made of its tree trunk diameter and again with the use of drones by a joint expedition from Oxford University and the South East Asia Rainforest Research Partnership (SEARRP).

In January, the actual height of this tree was physically measured by Jamiluddin Jami, a distinguished arborist of SEARRP, who shinned up this tree clutching a very long tape measure! He later revealed, “It was a scary climb, so windy, because the nearest trees are very distant. But, honestly the view from the top was incredible. I don’t know what to say other than it was very, very, very, amazing!” 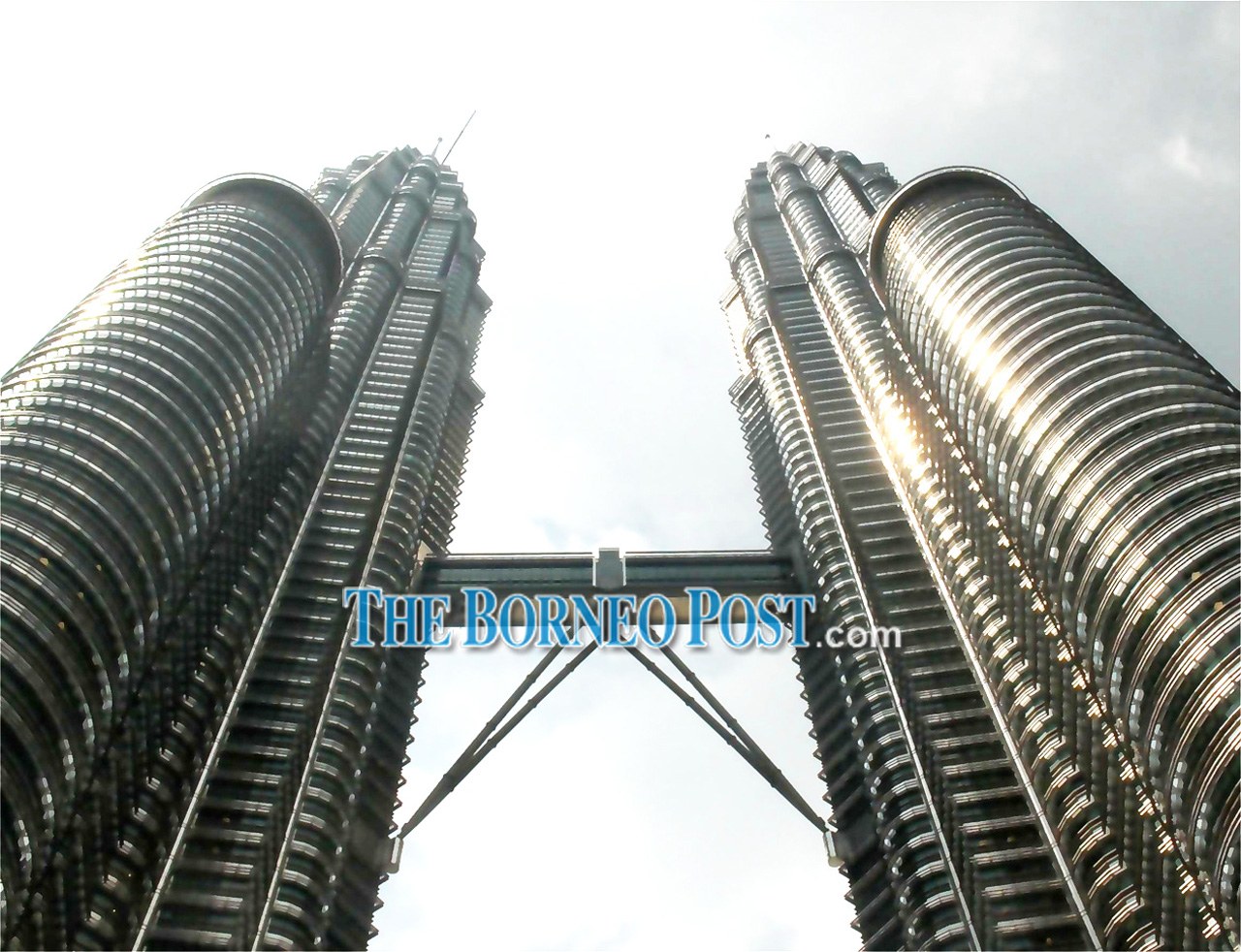 At 451.9 metres from ground level, the Twin Towers remains the tallest twin tower structure in the world.

Disregarding its roots, its total weight has been estimated at approximately 81,500kg plus, of which 95 per cent is held in its trunk, with the other 5 per cent in its 40-metre diameter canopy. It is a totally well-balanced, symmetrical tree and, to date, is recognised as the highest flowering species of plant in the world.

Dr Alexander Shenkin of the Environmental Change Institute, Oxford University, and a leading light in this research has been quoted as saying, “The maximum height of broad-leafed trees is limited to about 100 metres owing to the difficulties of sucking up water to that height.”

The strength of the winds be they prevailing or local as they are funnelled along valleys or over the crests of ridges will affect tall growing plants. The very fact that in tropical rainforests with high diurnal temperatures and high humidity (caused by constant evapotranspiration of plants), leaves tend to die quickly but are almost simultaneously replaced with new foliage. Clearly foliage offers resistance to winds and thus branches are snapped off in sudden gusts. Even in summertime, in the UK, when trees are in full foliage, branches snap off in gusty conditions. Wind stress is thus a major constraint to tree height.

Hydraulic constraints also come into play. For a tree to reach its maximum height, it needs a plentiful supply of water and thus damp soil conditions are a major factor in its growth. This summer, in the UK because of prolonged periods of drought and high temperatures reaching 34 degrees Celsius, I have seen leaves wilting and falling in large quantities from the tall silver birch trees (Betula pendula) in my garden. Researchers in Borneo have found that droughts, especially associated with El Nino events, are associated with the deaths of high growing tree species. There is no doubt that climate change is taking its toll on plant species worldwide and nowhere more than in Borneo. Here, the average annual precipitation has fallen by 700 millimetres over the last 70 years.

Sabah, commonly known as ’The Land Below the Wind’, certainly lives up to its name, for this is where the tallest tropical species of Shorea faguetiana are found. Menara is undoubtedly and literally a superlative tree, but are there yet even higher trees to be found elsewhere in Borneo, in Peninsular Malaysia or in Thailand? Only time will tell!

Perhaps the postal service could issue a commemorative stamp figuring Menara, as inevitably it would awaken many an overseas recipient of a postcard or letter to the natural wonders of Borneo.

There, from a great height, hangs a thought.