Friday, July 10
You are at:Home»News»Sabah»Book on memoirs of retired cop launched 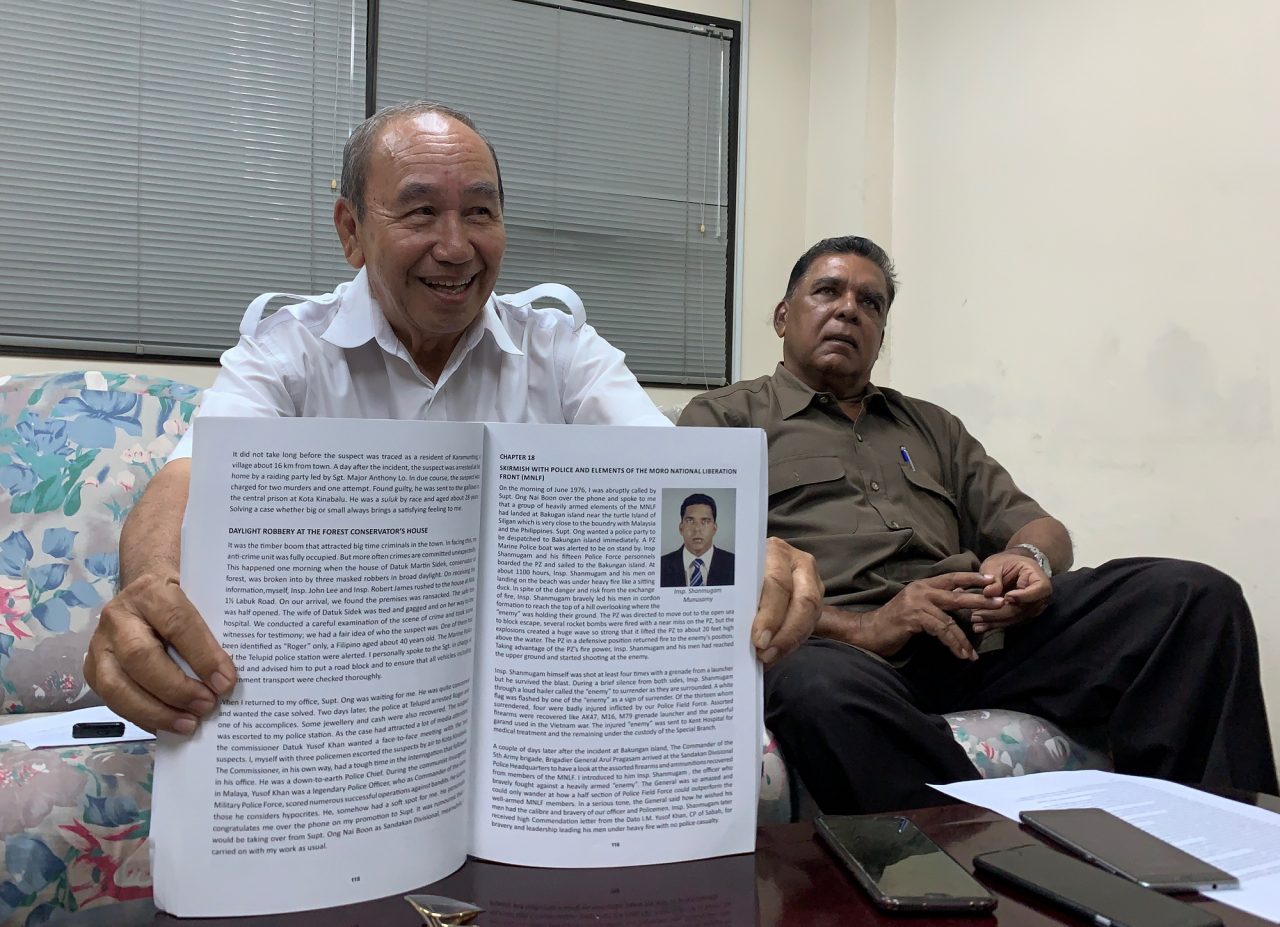 Clement (left), who describes Shanmugam (right) as a hero, spoke about the latter overpowering 13 MNLF with 15 policemen during a heavy gun battle in Sandakan’s Bakungan Island in June 1976.

KOTA KINABALU: A glimpse of Sabah’s history, security and culture could be seen through the eyes of retired police officer Datuk Clement Jaikul in his memoirs – Chancing The Rapids “My Way.”

The autobiography, launched on Malaysia Day here, is what Clement describes as “snapshots” of major events of his life that intertwined with historic moments of Sabah.

Clement, who became the first Dusun officer to reach the rank of “Senior Assistant Commissioner,” gives insights into historic events like formation of Malaysia and Indonesian confrontation to stories of fighting pirates and lighter moments of marriage, culture and even encounters with unsolved paranormal mysteries.

The Tambunan native related his journey as an 18-year-old boy who joined the North Borneo Police Force on Sept 9, 1958 as a constable to rise to the rank of Assistant Commissioner of Police on his retirement 37 years later on July 8, 1996.

“My story reflects on the ups and downs, the disappointments, the honour and glory of being a policeman as a profession,” Clement, 78, explained as he introduced his autobiography to journalists at Jalan Lintas here yesterday.

“I’ve taken snapshots of important events in my life. A lot of it had got to do with history of Sabah especially during the early days of Malaysia’s formation and confrontation,” he said, adding much of the information came from his police diary.

He also wrote about a host of “tid bits” like coming up close with a rhino and being shot by intruders, among a host of interesting short bites of security situations in Sabah.

Clement recalled in his memoirs introducing Frenchman Jacques Cousteneo to consider Pulau Sipadan to carry out underwater filming in 1984. Pulau Sipadan became famous as one of the world’s premier dive spots.

In his memoirs, Clement is candid about how his seniors helped him grow as well as those frowned or were critical of his ways in his decisions or positions taken in handling various situations.

The book also depicts him being wooed to join politics to contest in an election in 1976.

“I was always a policeman, politics never interests me,” he wrote in his memoirs, recollecting the then Golden Son of the Kadazan leader Peter Mojuntin who approached Clement to contest in the 1976 state elections.

Clement is well known for helming Sabah Marine Force for eight years where he was widely seen to be behind many police successes against Filipino pirates who terrorized fishing folks and coastal villagers in the east coast of Sabah.

In his memoirs, he gives some insights into pirate attacks in east coast Sabah since the late 1950s to the 1990s, was instrumental in creating an intelligence unit for the marine police to combat the piracy menace, including the ban of pump boats and dealing with fish bombing issues back in the days.

Brought along to the book launch was Shanmugam Munusamy who Clement mentions in his memoirs, calling the latter a hero.

Shanmugam was described as a brave Inspector who led his 15 men to overpower 13 Moro National Liberation Front (MNLF) combatants during a heavy gun battle at Bakungan Island in Sandakan in June 1976.