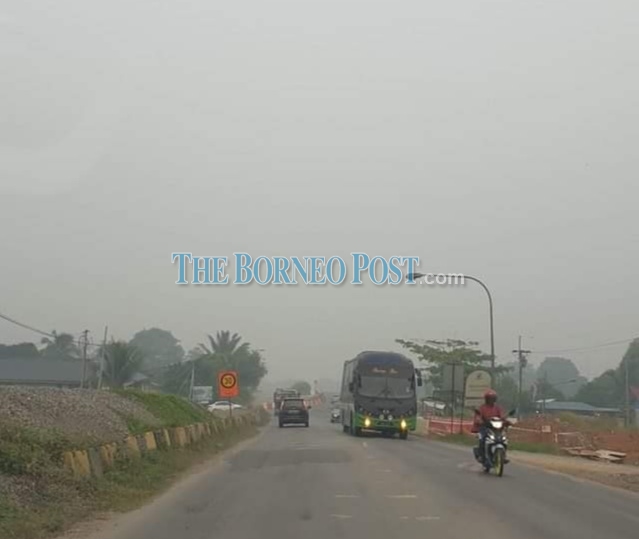 Photo shows the thick haze along a stretch of the Pan Borneo Highway road under construction in Serian.

SERIAN: Bukit Semuja assemblyman John Ilus has called on the Department of Environment to set up an air quality monitoring station in Serian.

He said Serian needs its own station to measure the exact Air Pollutant Index (API) for the division due to the seemingly worsening haze here.

He pointed out that Serian had to depend on API readings from the closest station located in Samarahan, but the reading can be disputed as not representing the real air quality in Serian.

Due to its close proximity to Indonesia, he said the transboundary haze is now causing areas in the division to be engulfed in thick haze and affecting visibility levels in Serian.

“There is no proper API reading for Serian and worst still in Tebedu, as Serian depends entirely on Samarahan for the API reading. As such, school authorities are in the dark on whether to close or keep the schools open, whereas parents are concerned about the health of their children. The various calls, SMSes, WhatsApp messages and all means of communications by the public show their concern.

“Therefore, we request the government through the relevant authorities such as the Department of Environment to take the initiative to obtain the API reading for Serian and/or Tebedu either through their mobile or temporary teams,” he said today.

He also advised parents and school authorities to keep children away from physical or outdoor activities due to the seemingly worsening haze.

“Also, I would like to ask the Education Department to close schools within the area for a few days until the situation improves,” he added.

Meanwhile, Tebedu District Office also suggested for an API monitoring station to be built in Tebedu as a long term solution to the matter.

The district officer Raymond Achen commented that the actual API reading there could be much worse than the one recorded in Samarahan station.

“The problem now is that the schools here are still opened because we have to follow orders that schools cannot be closed if the API reading is below 200. But, the situation here clearly shows a different picture,” he said.

Previous ArticleN95 face mask the one to choose in light of haze, medical professionals advise (Video)
Next Article ‘Interference in data transmission cause of faulty API readings’