KUCHING: A cloud seeding operation involving the Royal Malaysian Air Force (RMAF) and the Malaysian Meteorological Department took flight today in hopes of alleviating the effects of the haze currently affecting various parts of the state with artificially induced rain.

The RMAF’s C-130 Hercules aircraft arrived at the airfield this morning to assist in the cloud seeding operation, manned by six crew members.

It took off from Kuching Air Base at 1pm and flew over Kuching, Kota Samarahan, Serian, Sri Aman, betong, Saratok, Sarikei.

At the airbase prior to the operation, four water tanks were filled with 1,200 litres of water each. Then, each tank was filled with 200kg of salt.

The tanks filled with the salt-water mixture were then loaded into the aircraft to be sprayed in mid-air in the hopes of inducing rain.

It is learnt that the mixture was sprayed onto cumulus clouds, condensating and increasing the amount of moisture and in turn, the chances of rain.

When met by reporters, deputy director of thr state Meteorological Department Siniarovina Urban Sinyaw revealed that the use of the mixture was crucial in cloud seeding. 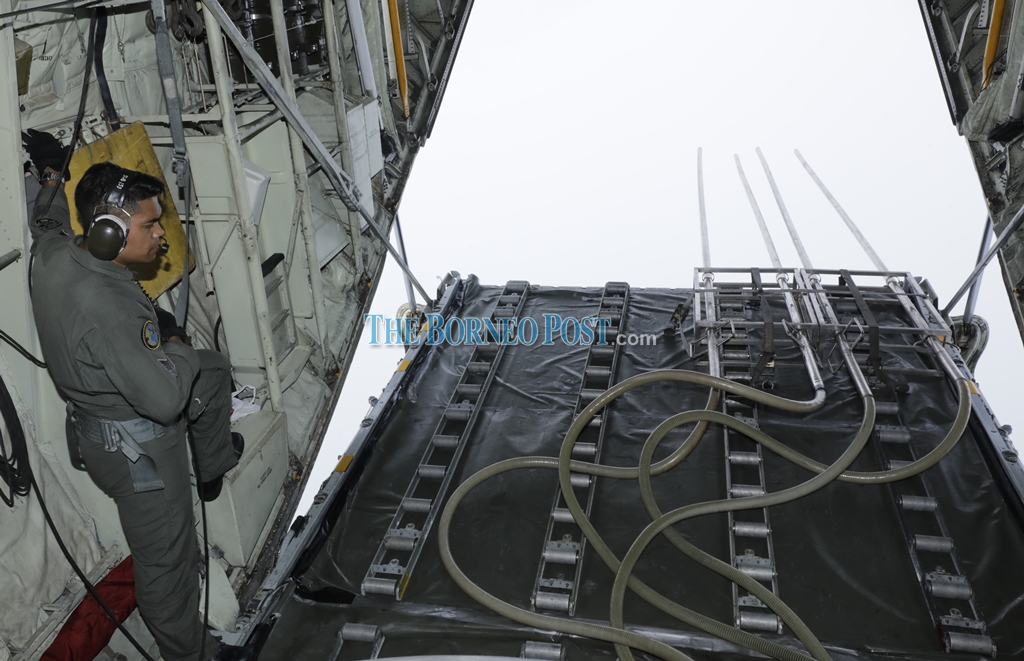 A loadmaster oversees the cloud seeding operation. Photo by Chimon Upon

She said the mixture would draw in moisture, thus encouraging rainfall to occur.

“In commercial flights, aircrafts would usually avoid clouds. But for this operation, the aircraft flies into the clouds. That is where we begin our cloud seeding operation,” she added.

It took about 30 minutes to an hour in order for rainclouds to form after the cloud seeding operation.

The operation ended at about 3pm today and will continue on until Sept 22.

Meanwhile, data released by the Department of Environment (DOE) revealed a noticable reduction in the Air Pollutant Index (API) readings after the cloud seeding operation.

As at 4pm today, the API for Sri Aman showed a reading of 409, in comparison to the reading of 414 as of 1pm today. Sri Aman’s air quality remained hazardous as the API reading had breached the 300 mark.

Kuching recorded an API reading of 234, Samarahan and Sarikei with 208 and Sibu with 171.