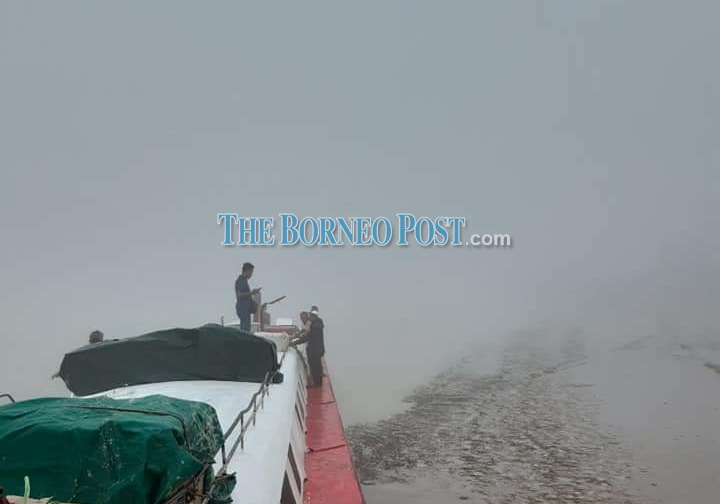 The express boat that was stuck on its route between Sibu and Kapit due to poor visibility and low tide.

SIBU: Poor visibility due to thick haze as well as low tide forced an express boat plying the Sibu-Song-Kapit route to stop at a riverbank 15 minutes into the journey.

According to Sarawak Rivers Board (SRB) controller Richard Tajan, the boat carrying 12 passengers got stuck when it tried to continue its journey after leaving port at 6.15am.

“The boat could not move and got stuck due to the low water level because of the low tide.

“Another express boat was immediately rushed to the scene to tow the stranded boat into the middle of the river.

“The stranded express boat then resumed its journey and arrived in Song at 9.30am and later, arrived safely in Kapit at 10.25am. All 12 passengers safely disembarked at Kapit passenger boat terminal,” he told The Borneo Post when asked to confirm the authenticity of the incident that had been circulated via WhatsApp.

Richard said prior to this, the board had issued a riverine warning notice to all mariners.

He added that the notice reminded skippers to take always precautions during the haze, such as to reduce speed due to low visibility.

They are to switch on their navigation lights and to sound their horn to alert oncoming vessels, he added.

Boat operators are also urged to increase the number of skippers and workers, said Richard.