Sunday, September 20
You are at:Home»News»Nation»Physical newspapers will survive if contents are of quality 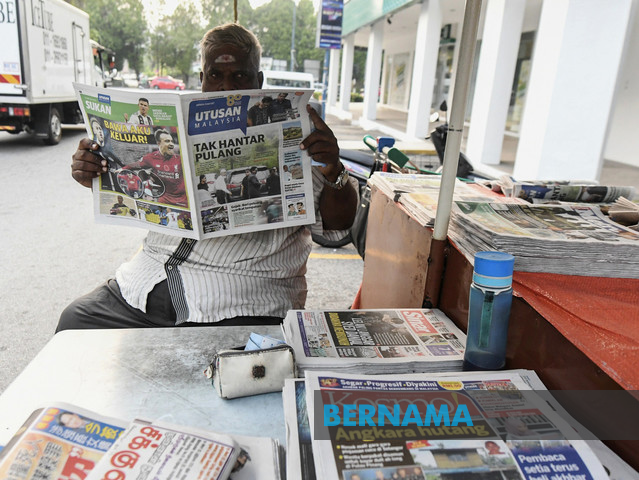 A man reads a copy of a Malay daily. Bernama Photo

KUALA LUMPUR: Physical newspaper is seen to be increasingly desperate to survive and remain relevant as the world progresses towards digitisation.

However, Universiti Kebangsaan Malaysia (UKM) Communication and Digital Society Centre senior lecturer Dr Shahrul Nazmi Sannusi believes print newspapers would be able to survive if the contents are of quality.

“Newspapers with niche content in certain areas, such as business, politics and economics will remain relevant as they have their own readers,” he told Bernama after Bicara Petang slot titled “Is Printed Media Still Relevant?” on Bernama Radio, today.

Shahrul Nazmi explained that some publishing companies failed to survive despite publishing a digital version of the newspaper because of the less stable online advertising business model, as opposed to print newspapers which have fixed price for certain slots.

“Price (of advertising) is an issue for online news due to unstable advertising business model. That’s why despite hundreds of thousands of people reading digital newspapers, their income is still low. Newspapers generate revenue through advertising,” he added.

Shahrul Nazmi who had served as a journalist for seven years, said the newspaper industry is in the midst of darkness and revival, but it is up to the publishing companies to strategise.

He added that most companies in the print industry were in the process of recovering but this is a slow process and it varied from one company to another because the newspaper industry itself is in a state of uncertainty.

Nevertheless, he is positive that overall, newspapers would still be able to survive as readers are still seeking for credible news sources and media literacy among young people has increased. – Bernama