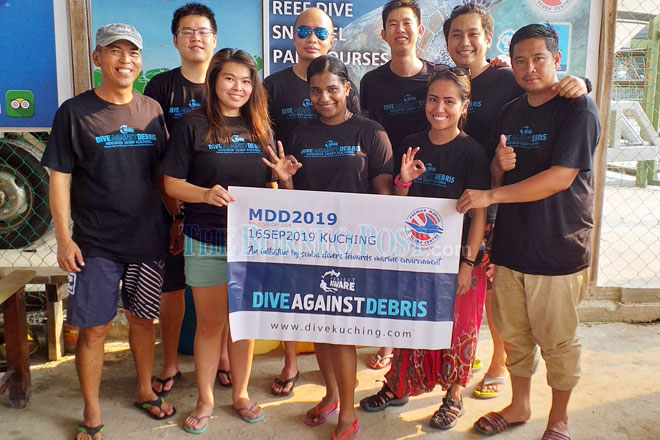 The divers and centre instructors in a group photo.

The marine conservation event started by Premier Marine & Scuba Centre has run since 2012.

A press release from the centre yesterday said the dive is unique as the event costs are shared by the participating divers.

“Because of the dive condition at the wreck and the task involved, only divers with a certain level and experience were allowed to participate,” said the press release.

“This year’s event also saw two divers from neighbouring country join in. Everyone felt the sense of achievement and enjoyed the unity which will bond them for life.”

The divers departed Santubong early on Monday morning in two boats and made two dives at the site.

As the weather was hazy, the dives were more challenging due to less light penetration and lower visibility.

Although there are still abandoned nets and fish traps at the wreck site, the divers managed to remove 78kg of the nets in terms of dry weight.

The nets were obviously from fishing trawlers trying their luck at the wreck sites but somehow got stuck.

When that happened, the lines were cut and the nets abandoned.

These are also known as ghost nets as they are left to forever trap fish and other marine life, leaving them to die, and depleting the fish stock.

Abandoned fish traps and lures were also found at the wrecks.

The wreck of the Japanese World War II warship Katori Maru is located off the coast of Santubong.