Saturday, July 4
You are at:Home»News»Foreign BASE jumpers savour Sibu experience 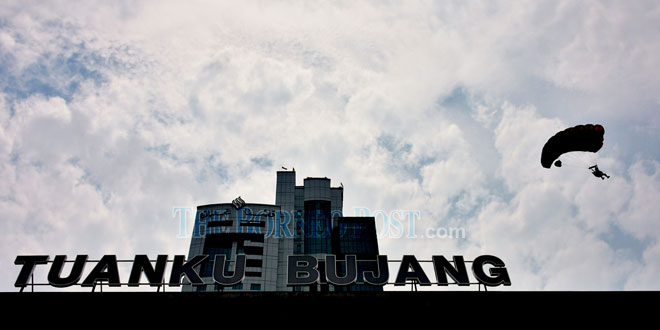 A BASE jumper leaps off Wisma Sanyan, touted as Sarawak’s tallest building. 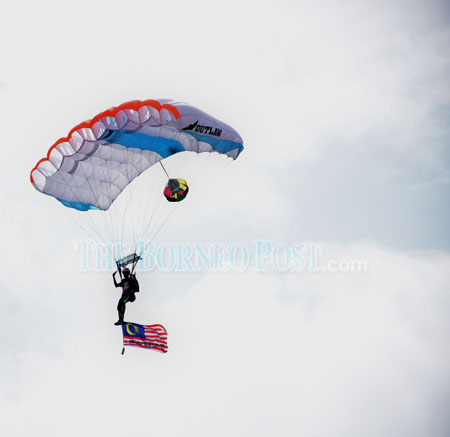 A BASE jumper flies the Jalur Gemilang.

SIBU: Foreign BASE jumpers expressed delight in taking their ‘leaps of faith’ off the 126m high Wisma Sanyan during the 11th edition of Sibu International BASE Jump.

Olympia Patej, who is from Poland, came to know about the event after surfing the Internet.

“It is my first time travelling to Malaysia specially for Sibu International BASE Jump 2019.”

“It’s one of the best events that I have ever joined,” she said when met after making her leap yesterday.

Patej has completed 143 such jumps in Estonia, Italy and Croatia since she started in the activity in May.

She hopes to do so again at the Kuala Lumpur Tower Jump end of this month.

Patej, who is a civil engineer, also remarked on the kind and warm reception given by the local folk for the foreign jumpers.

Another female jumper Nagezhga Kiseleva hails from Russia. She got her start in BASE jumping two years ago.

“However, I broke my left leg while doing my BASE jump in Switzerland. Thus, I decided to take a good long rest after that,” she told The Borneo Post here.

However, she did not quit and summoned the courage to make a comeback by joining yesterdays’s event here.

It was her second time after joining the Sibu International BASE Jump last year.

Another participant, Grzegorz Ciesielsyi – also from Poland – is a skydiving instructor, who has been into BASE jumping for five years.

One reason why he came to Sibu was to reach his career tally of 600 jumps, and he was glad that he had accomplished the milestone here yesterday.

He had nothing but praise for the local people and the Sibu event, which he described as ‘super nice’.

“I love the vast landing area. It is a ‘super big’ landing area and super nice with the green lawn well maintained,” added the veteran who has jumped in Norway, Switzerland, Latvia, Estonia, Germany, Poland and Italy – just to name a few countries.

The BASE jumpers are from Australia, Canada, the US, New Zealand, Indonesia, Estonia, Russia, Poland and Malaysia.

The annual event, run by the Sibu Resident’s Office, in collaboration with Sibu Divisional Tourism Task Group, is aimed at promoting Sibu as destination for extreme games.