Tuesday, May 11
You are at:Home»News»‘Property upkeep still developers’ responsibility’ 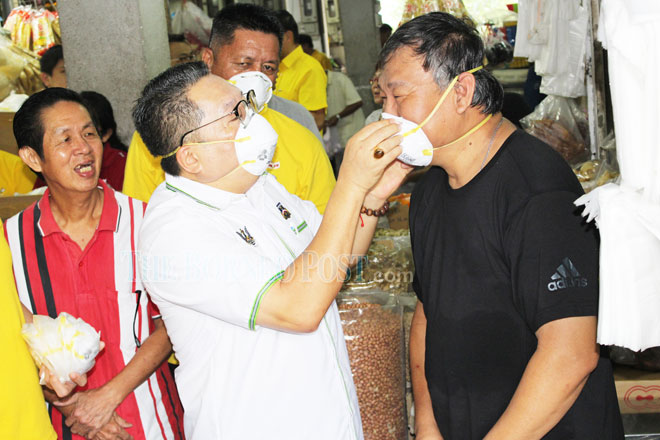 Wee (second right) helps a trader put on a N95 face mask during the walkabout at Petanak Market.

He believes that people ‘just run away from their responsibility, resulting in the council (having) to come in and take over the management of properties, then the council would end up managing all the buildings’.

“I think the responsibility and accountability on the developers’ part should be enhanced.

“We don’t want a situation where whenever a management company fails to maintain its property, the council would just come in and take over.

“If so, then the council would become a management company. This is not what we want,” he said when met by reporters during his walkabout at the Petanak Market yesterday.

Wee was commenting on the proposal for Kuching City South Council (MBKS) to take over the management of the Pending Heights flats, which are in a dilapidated state.

In this regard, the mayor stressed the need to identify the root cause of the problem and seek consultation with the experts before any decisions could be made.

Nevertheless, Wee assured all that the MBKS would be looking towards assisting the developer of the Pending Heights flats in setting up a management company  to provide the necessary level of services to the tenants and residents.

This said, he also believed that all the tenants and shop-owners of such properties should be engaged by the council as well, in seeking the best alternatives for address their plight.

“I think we should have this kind of dialogue so that we know what is the best way to resolve their problem,” said Wee.

The mayor acknowledged the provision of several Ordinances allowing the MBKS to take actions with respect to poorly-maintained properties, but he pointed out that assisting the developers to honour their obligations to the tenants and residents would be the preferred option in safeguarding the interests of all parties – the developers, the occupants and the city council.

Separately, Wee said the MBKS had made available 2,000 face masks to be distributed to traders in markets around the city, in view of the current haze situation.

On a related matter, he also announced that the venue for the Kuching Waterfront Jazz Festival 2019 had been relocated to MBKS Community Hall at Jalan Padungan here.