Friday, February 3
You are at:Home»News»JPJ to open e-bidding next month for QAA-Y, QS-L number series
For the freshest news, join The Borneo Post's Telegram Channel and The Borneo Post on Newswav. 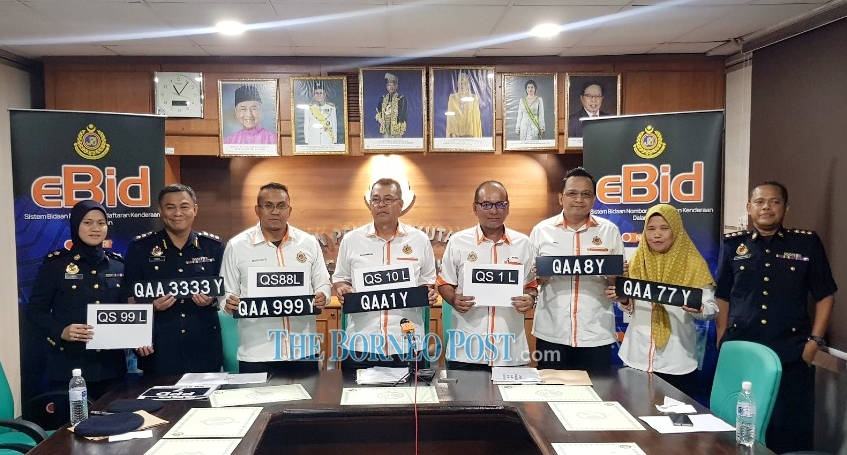 Shaharuddin (fourth left) and others holding up the samples of the new number series.

MIRI: The state Road Transport Department (JPJ) is aiming for a total bid of RM1 million for the QAA-Y and QS-L series through the implementation of its JPJeBid system.

JPJ Malaysia director-general Datuk Seri Shaharuddin Khalid said JPJeBid was launched last April with the FC plate series and this will be the first time the system is being extended to JPJ Sarawak.

“Bids for other areas’ series in Sarawak will be opened later as the serial numbers in other areas are still a lot and it is according to the relevance of the numbers.

“On average, Sarawak is currently collecting between RM500,000 and RM800,000 for a series and we are expecting Sarawak to reach RM1 million.

“The JPJeBid offers transparency from the registration transaction until the payment is made. Bidders can also find out their real-time bid rankings and there is no element of human intervention,” he explained during the launch of JPJeBid Sarawak at the JPJ Miri branch office today.

Shaharuddin said nine states had implemented the system, including Sarawak, and according to the latest JPJeBid statistics report, the ‘ALL’ series (from the state of Perak) had raised RM3.4 million.

The bid price in JPJeBid is based on the minimum price that has been set and with a minimum bid increase of five per cent.

Elaborating further, Shaharudin said there was no restriction on bidding, but each individual is only eligible to win a maximum of three vehicle numbers, while a company is limited to no more than five vehicle numbers.