Thursday, February 2
You are at:Home»News»Nation»Video of elephant swimming in Kenyir Lake goes viral
For the freshest news, join The Borneo Post's Telegram Channel and The Borneo Post on Newswav. 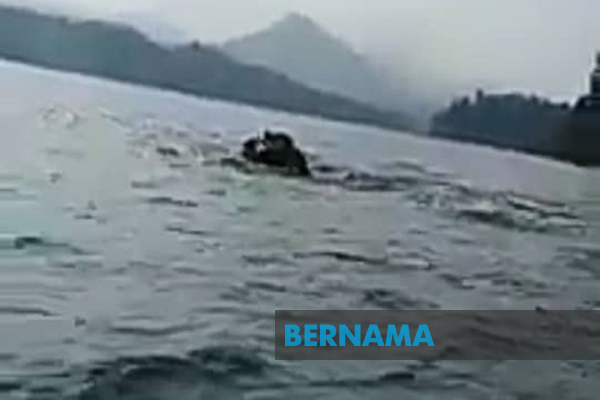 Netizens were excited recently when a video emerged of an elephant swimming in Kenyir Lake, Hulu Terengganu. – Bernama photo

KUALA TERENGGANU: Netizens were excited recently when a video emerged of an elephant swimming in Kenyir Lake, Hulu Terengganu.

The video was shared by angler Mohd Suwardi Muhammad Azmi, 37, who had gone to the lake on a fishing trip when he saw the elephant, the largest land mammal, swimming in the lake.

In the video which Mohd Suwardi posted on Facebook, the elephant could be seen nonchalantly swimming across the lake, using its trunk to breathe.

“This is not my first time seeing an elephant swim. Since I started fishing here in 2004, I have seen elephants swim in the water four times,” he said.

An assistant medical officer at the Sultanah Nur Zahirah Hospital here, Mohd Suwardi said he was surprised when his three-minute-45-second video of the swimming elephant went viral, with 20,000 views, 374 likes and shared 35 times.

“Maybe that is because many did not know that elephants can swim,” he told Bernama when contacted today.

Mohd Suwardi said he was happy to see the elephant at the lake because it meant that it was still a habitat for the mammal.

A regular visitor to Kenyir Lake, Mohd Suwardi said he has also seen other animals such as tigers, wild boars, monkeys, wild goats, deer and mousedeer, taking a dip there,

“It is a normal sight for people who come here,” he said, adding that when they come across these animals, the anglers do not disturb them but just watch as they swim past.

Meanwhile, Terengganu Wildlife Department director Dr Abdul Malek Mohd Yusof said elephants are among the wild animals which can still be found in the state.

“The department will catch these elephants if we get information that they threaten the safety of the public or destroy property such as crops, if not, we leave them alone in their natural habitat,” he said. – Bernama