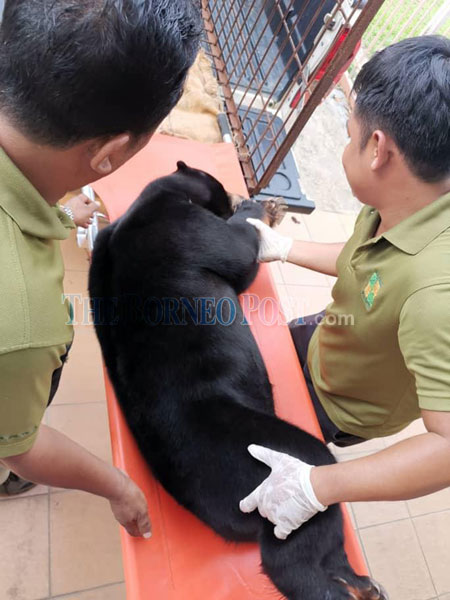 Its CEO Zolkipli Mohamad Aton in a statement said although the house owner had a valid licence issued by the Controller of Wildlife from the Sarawak Forest Department, he had violated certain terms and conditions of the licence.

He said an enforcement team was dispatched to the house at 2.30pm to rescue the 76kg bear – a protected species – before sending it to the Matang Wildlife Centre for a medical examination.

He added that the sun bear, which had been locked in the cage for years, needed to undergo rehabilitation before a decision is made on whether it is fit to released back into the wild.

Zolkipli said sun bears are protected under the state’s Wildlife Protection Ordinance 1998, whereby killing, keeping, selling or buying the animal or its derivatives are prohibited.

“Those found guilty can be jailed for one year and fined RM10,000. Licences can be applied but the applicants must comply with the terms and conditions,” he added.

SFC, meanwhile, extended its appreciation to members of the public who have assisted the authorities in curtailing the illegal wildlife trade as well as illegal logging in the state.

SFC general manager Oswald Braken Tisen when contacted said there is a provision in the Wildlife Protection Ordinance 1998 for the keeping of wildlife under licence.

Assistant Minister of Urban Development and Resources Datuk Len Talif Salleh, meanwhile, said the state has adequate legal instruments in the form of the Wildlife Protection Ordinance 1998 and National Park and Nature Reserve Ordinance 1998 that govern the administration and management of wildlife in Sarawak.

“Having said that, what we need to do is increase enforcement activities, improve intelligence and widen collaboration with the public at large by way of strengthening our Honorary Wildlife Ranger programme,” he said.