Wednesday, July 15
You are at:Home»News»Abang Johari: New formula submitted on revenue-sharing with Petronas in light of oil royalty U-turn 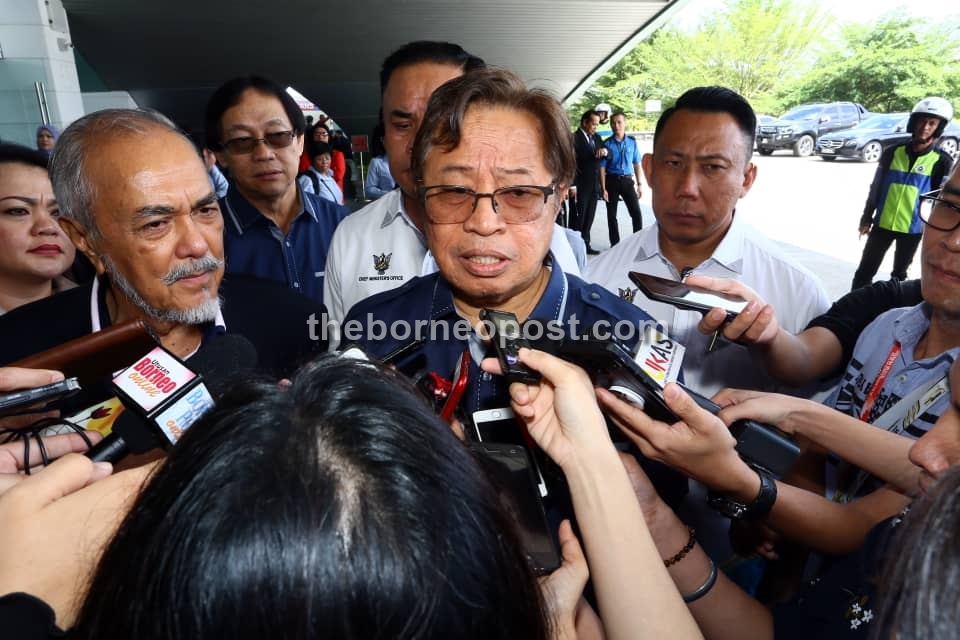 Abang Johari has submitted a formula which he terms to be both beneficial to Petronas and the state government. Photo by Muhammad Rais Sanusi

KUCHING: The Sarawak government has submitted a new formula to the federal government on revenue-sharing with Petroliam Nasional Berhad (Petronas).

Chief Minister Datuk Patinggi Abang Johari Tun Openg said today that Sarawak was aware that Petronas “was an international company but it doesn’t mean that you can deprive us of our revenue”.

“I have another formula. And I have submitted it to them (Putrajaya). The formula while maintaining Petronas as an international company will find a way where Sarawak can take part,” he said when met by journalists after launching the state-level Women Day 2019 at Borneo Convention Centre Kuching here.

He made these remarks when prompted for comments on Prime Minister Tun Dr Mahathir Mohamad’s statement that described the 20 per cent oil royalty for Sarawak and Sabah as “not workable”.

On a note that the State Legislative Assembly (DUN) in May 2014 passed a motion to request the federal government for an increase in oil royalty from five to 20 per cent, he said: “Yes, because they promised. Then we said you promised, then we said we definitely want 20 per cent. But now that is a different story.”

In the Pakatan Harapan (PH) manifesto during the 2018 general elections, Sarawakians were promised an increase of oil and gas royalties from the present five per cent to 20 per cent.

Asked whether Putrajaya had endorsed the formula, Abang Johari reiterated: “I have submitted our proposal, our own formula.”

“It is (an) entirely new model which I believe won’t jeorpardise Petronas as an international company. We are the one who produce raw material for Petronas in terms of gas and crude (oil) particularly gas.

“So I have my own formula which is commercial in nature. Up to them (Putrajaya) now,” he said.

The chief minister said he could not disclose any more details on the formula as negotiations with the federal government were still ongoing.

He was quick to assert that Sarawak was standing firm on the new model, which he stressed would not jeopardise Petronas.

“Maybe the federal government may lose some revenue. But of course Sarawak government also wants revenue. It must be (a) fair formula,” added Abang Johari.

Dr Mahathir was yesterday quoted in a Bernama report as saying the government had realised that giving 20 per cent oil royalty would mean that Petronas would no longer become the international oil company that it was.

“So we have to appeal to the Sabah and Sarawak governments that it is really not workable. They don’t want to kill Petronas but at the same time they want more money, so we’re trying to work out how we can give more money without undermining Petronas’ own strength,” he told a dialogue session at the JP Morgan headquarters in New York.

Previous ArticleStill hope for PBDSB registration to be restored
Next Article No endorsement for MPKK if it infringes Sarawak’s rights, says CM