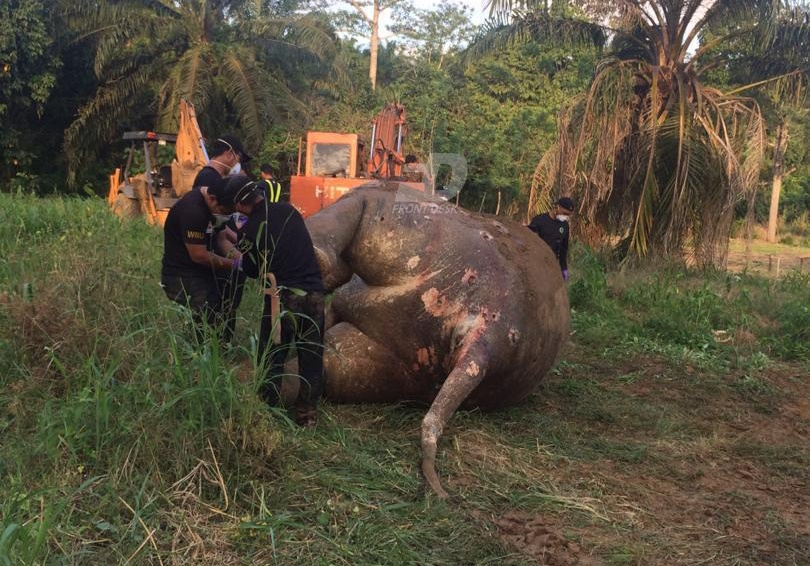 The Sabah Wildlife Department (SWD) described the death of the pygmy elephant in Sungai Udin, Dumpas, Kalabakan, Tawau, on Thursday, as a brutal killing and post-mortem results found at least 70 bullets in the animal’s body. – Bernama photo

KOTA KINABALU: The Sabah Wildlife Department (SWD) described the death of the pygmy elephant in Sungai Udin, Dumpas, Kalabakan, Tawau, on Thursday, as a brutal killing and post-mortem results found at least 70 bullets in the animal’s body.

SWD director Augustine Tuuga said the numerous bullets found in the female elephant’s body , reflects the pain the elephant must have gone through.

“Lots of bullets were found embedded in the elephant’s body and we can imagine its state when being shot… in pain but not dead and that’s probably why many shots were fired (by poachers),” he said when contacted by Bernama here today.

However, Augustine did not want to elaborate on the matter as it was likely to interfere with ongoing investigations to identify the cause of the elephant’s death and to gather strong evidence to bring those responsible to court.

“We hope to catch those who killed the elephant and hand them over to the court to face stern action,” he said, adding that the investigation did not have a time frame, but it had to be done within a month according to the department’s standard operating procedure.

Augustine said his department will continue to work closely with the local community to ensure the same thing does not recur and ask them to help prevent poaching and to be witnesses if they know or see anyone engage in such activities.

Last Thursday, a group of anglers found the carcass of the pygmy elephant in Sungai Udin, Dumpas in Kalabakan, near Tawau, believed to have been dead for three to four days.

The female elephant estimated to be between 11 and 12 years old, with a height of 1.8 metres was found slumped near the river bank and initial inspection by a SWD team found gunshot wounds on the cheeks, head, body and the back of the elephant. – Bernama