Tuesday, January 28
You are at:Home»News»Crime»Cops call up individuals for disrespecting Negaraku during event in Kuching 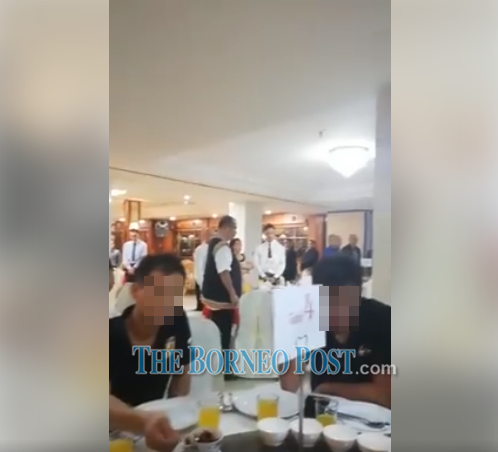 A screen grab of the viral video which shows two individuals who refused to stand for Negaraku during a fundraising dinner last Friday.

KUCHING: Police will call up several individuals who refused to stand for the national anthem, Negaraku, in a video recording that went viral on social media.

Sarawak deputy police commissioner Dato Dev Kumar said a police report had been lodged on the incident today and those individuals would be summoned to give their statements.

“Based on this report, police have commence their investigation under Section 8 (3) of the National Anthem Act 1968,” he said, adding that the incident took place at a hotel here.

The individuals are believed to be members of Sarawak for Sarawakians (S4S) and the incident took place during a Parti Bangsa Dayak Sarawak Baru (PBDSB) fundraising dinner last Friday evening.

S4S member Shaow Tung Leong, who had reportedly shared the video on Facebook told news portal Free Malaysia Today that it was a silent protest to show their dissatisfaction over unfulfilled promises to the state.

He said Malaysia has been unfair to the people of Sarawak, especially after Prime Minister Tun Dr Mahathir Mohamad called the 20 per cent oil royalty to Sabah and Sarawak not “workable”.

“So we refused to stand up when Negaraku was played,” Leong told the news portal.