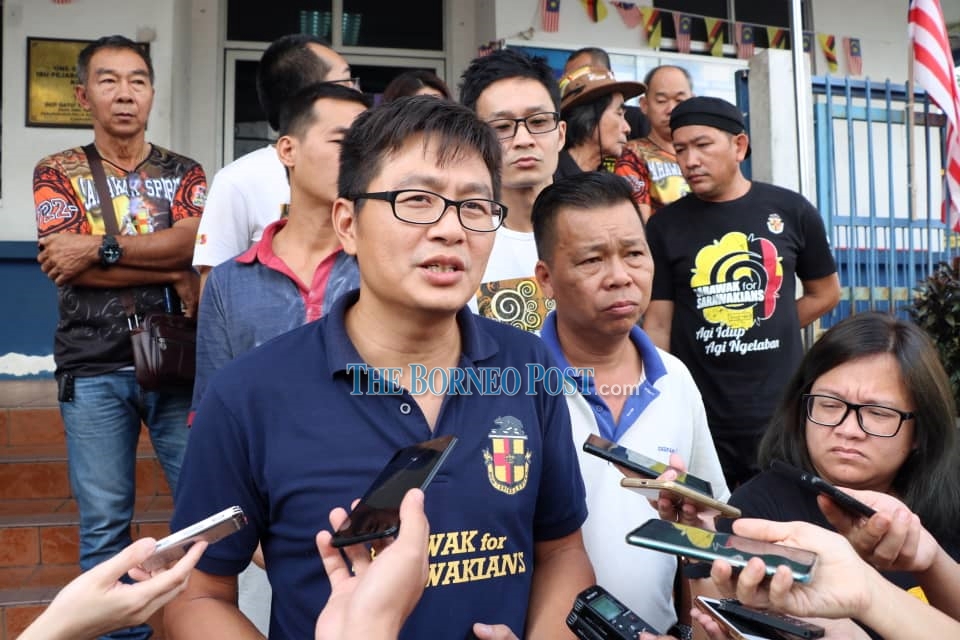 Leong speaking to reporters in front of the Simpang Tiga One Stop Centre at Kuching District Police Headquarters today.

KUCHING: Police have recorded statements from eight members of Sarawak for Sarawakians (S4S) after they refused to stand for the national anthem, Negaraku, during a function here last Friday evening.

The group, which comprised of seven men and a woman were interviewed by the police at the Simpang Tiga One Stop Centre at Kuching District Police Headquarters here from about 3pm to 5pm.

They were called up by the police after a video recording of them remained seated as other guests at Parti Bangsa Dayak Sarawak Baru (PBDSB) fundraising dinner stood up for the national anthem had gone viral on social media.

The group’s spokesperson, Alex Leong, who had posted the viral video on his Facebook account under the name Shaow Tung Leong, said they were at police station to give statements to the Investigating officers on what transpired that night.

“In the police statement, we told the police that this was our silent protest because we felt frustrated and angry with the Malaysian government and the Prime Minister for going back against their words or manifesto, that they could not give our 20 per cent oil royalty back.

“Apart from that, the federal government could not honour our Malaysia Agreement 1963 (MA63) and the confusions on 831 (Aug 31) and 916 (Malaysia Day) celebrations,” Leong told reporters when met outside the Simpang Tiga One Stop Centre here, this afternoon.

According to him, they didn’t know who reported or lodged report against them and were also not aware the National Anthem Act 1968.

Police are investigating the case under Section 8 (3) of the National Anthem Act 1968.