Thursday, June 4
You are at:Home»News»NGO disappointed with S4S members for tarnishing fundraising dinner by disrespecting Negaraku 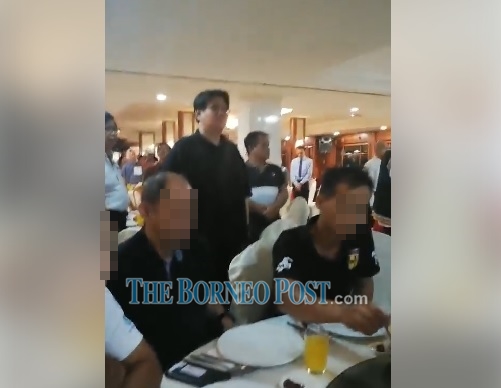 A screen grab of the viral video which shows individuals who refused to stand for Negaraku during a fundraising dinner last Friday.

KUCHING: Terabai Kenyalang Heritage Association Sarawak has expressed its disappointment with some of Sarawak for Sarawakians (S4S) members for tarnishing the association’s fundraising dinner by not respecting the national anthem which was played before the start of the dinner.

The civil society in a press statement today said the S4S members, who were the invited guests at the dinner, should have used another platform to display their so called silent protest against the federal government.

“We regretted the action of this group of individuals who did not wish to respect Negaraku when it was being played before the start of our dinner. This has given a negative public perception on us,” the statement said.

The NGO’s fund raising dinner was held at a hotel last Friday.

According to Terabai Kenyalang, the video of the incident went viral after one of the guests uploaded it on social media. The video showed several individuals, identified as S4S members, refused to stand up as a sign of respect when the national was being played.

The S4S members claimed that their action was a silent protest towards the federal government’s broken election promises.

The civil society said they would be ready to cooperate with the police in its probe over the incident.