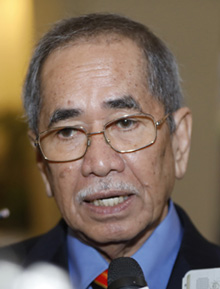 The Santubong MP said a law is needed to empower the unit to investigate, arrest, detain and prosecute possible offenders.

He was responding to The Borneo Post report quoting Chief Minister Datuk Patinggi Abang Johari Tun Openg that the state government would amend the Sarawak Fisheries Ordinance 2003 to strengthen regulatory enforcement in the state’s riverine and coastal fishing industry by having, among other things, its own enforcement unit.

“I just come up with the name Sarawak Marine Coastal Unit. I couldn’t come up with better name. But whatever it is we need fast petrol boats, may be crews of 12, with arms for protection, bases complete with detaining centres and compound areas for seized boats and detained individuals, in Kuching, Mukah and Miri at least,” he said when contacted.

“We got to have the unit. We (at the moment) could not, because the authority is given by the respective laws, direct the Marine Police and Maritime Enforcement Agency. And then under the devolution of power 2017 there are indeed DPPs (federal deputy public prosecutors) in Sarawak,” he pointed out.

Another huddle is to arm the state’s marine enforcement unit which is under the police authority and therefore the Ministry of Home Affairs, he added.

“We simply cannot send our unit out there without proper arms, even for personal protection. However, if Putrajaya is serious in protecting Sarawak’s coastline all those could be overcome by consent.

“After all, Sarawak is not creating new law to abrogate the national laws but to complement federal laws enforcement. Perhaps, Sarawak may want to use the Residual Authority under Article 77 to ‘stop-gap’ the lacuna in federal law and what is not enforced by the federal government. The ultimate aim is to protect Malaysia’s waters and laws,” he said.

Supporting the chief minister’s idea, Wan Junaidi said if the federal government is short in resources and funds Putrajaya should seriously consider allowing Sarawak to complement the Maritime Enforcement Agency and the Marine Police by creating the Sarawak Marine Coastal Protection Unit to help protect Sarawak’s long and rich coastline from encroachment and rampant breach of fisheries laws and regulations.

Wan Junaidi said: “There is a serious neglect to protect the coastal area of Sarawak from encroachment by foreign fishing and fishermen. This has been going on for years.”

Before the establishment of the Maritime Department Malaysia the coastal areas of the country were guarded by the Marine Police only and the navy was only responsible for military incursion not matters of economic and crime in nature, he added.

“It was, theoretically, supposed to be good, but unfortunately it was not. Both the Marine Police and Maritime Department suffered from deficiencies in performance and effectiveness. Reason being the boats they have are old, dilapidated and in need of constant and continuous repair. There were too very few new boats acquired.”

The government has, over the years, neglected to review the need to protect the 5,000 kilometres of coastal line of Malaysia, he pointed out.

“Parliamentarians spoke on this issue from time to time, but little steps were taken to beef-up both the Marine Police and the Maritime Department in order to enhance their potential. Perhaps, the Royal Malaysia Police have scaled down its Marine Police unit from the emphasis given to it in the 1970s and early 1980s,” he said.

Sarawak has 1,200 kilometres of coastline and rich economic zone, the resources of which are relatively untapped and the fisheries and maritime laws are not properly supervised, he added.

He said these had resulted in the encroachment by foreign fishermen from Vietnam, Taiwan, Indonesia and even China besides the internal encroachment of licence holders A, B, C and deep-sea fishing was rampant.

“These have caused unhappiness to the fishermen especially those who rely on their catches for livelihood. On the other-hand, our deep sea fishing are in ‘foreign hands’ though the licences are in the name of the locals but the fishing and operation are done by the Thais, Vietnamese or the Indonesians, these people are not reliable and sell their fish in the open sea,” said Wan Junaidi.

“The end result is that the state could not even develop its fishing industry and infrastructure like Tanjung Manis and our LKIM facilities in Tg Bako are likely to be white elephants. Because we do not have the fish resources from the sea to keep the industry going. This is a great loss to our state,” he added.