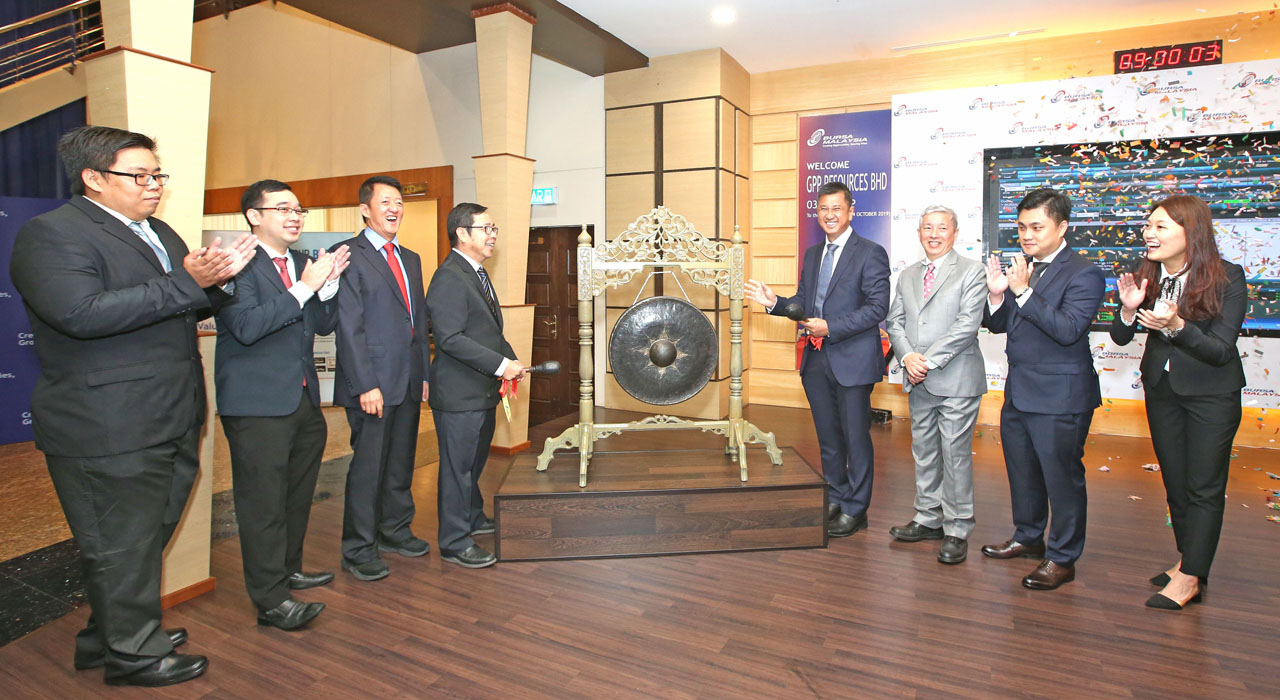 Tan (fifth left) alongside other directors from GPP Resources pose for a photo during GPP’s listing yesterday.

KUCHING: Green energy company GPP Resources Bhd, made its debut on Bursa Malaysia’s Leading Entrepreneur Accelerator Platform (LEAP) at 28.5 sen, a premium of half-a-sen from its reference price of 28 sen.

At the opening bell, the company saw 20,000 of the total 15.60 million new shares offered being transacted.

GPP and its subsidiaries are principally involved in businesses that are related to the use of biomass to produce renewable energy and OPT products.

Executive chairman Tan Tiam Aik said the group will continue to develop new OPT products to broaden its product portfolio to serve wider market and will venture into a build-operate-own model where it will operate and own biogas plants that the Group builds to generate electricity for the consumption of the palm oil mill and for sales to the National Grid.

“We intend to apply to become a renewable energy power producer under the FiT mechanism and seek joint-venture partners within 24 months upon our listing on the LEAP Market of Bursa Malaysia Securities Berhad (Bursa Securities).

“This will be beneficial to the future of our Group as we will be able to expand our revenue stream as well as generate recurring income for our Group,” he added in a statement.

OPT is produced during the felling of oil palm trees at the end of their economic lifespan, which is approximately 25 to 30 years. Historically, the OPT has been left for natural decomposition after felling due to its high moisture content.

Instead of leaving OPT to decompose as waste, it can be processed and manufactured into plywood, medium density fibreboard, particle board and fibre-reinforced plastic composites.

Speaking to reporters at the Press Conference after GPP’s Listing Ceremony on the LEAP Market of Bursa, Tan said the Group will continue to leverage on the growth in the palm oil industry in Malaysia to grow its renewable energy and OPT products segments, which use organic wastes produced from the palm oil industry to serve as feedstock and raw materials for its businesses.

Under the listing exercise, GPP raised RM4.37 million from an excluded issuance of 15.60 million new shares in GPP to selected sophisticated investors at an issue price of RM0.28 per share.

GPP plans to utilise approximately RM1 million raised from the listing exercise as capital expenditure to purchase new machineries and equipment to cater for the Group’s current and future operations of OPT products business.

The Group will also utilise RM1.32 million from the proceeds as working capital for marketing and promotional activities as well as to finance the Group’s day-to-day operations; RM0.5 millionfor research and development, while the remaining RM1.55 million (35.49%) to be used to defray listing expenses.