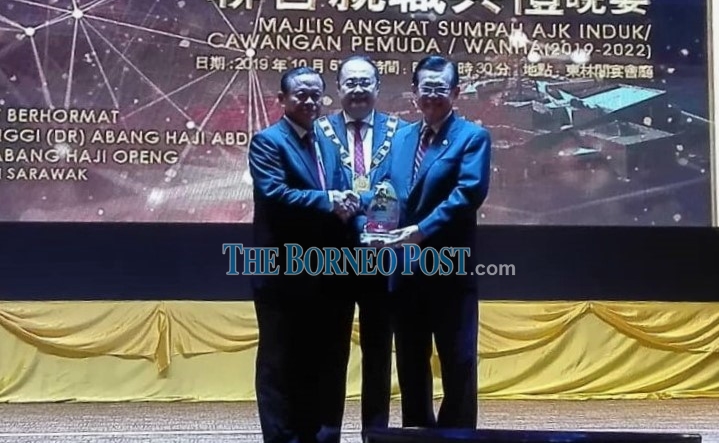 Abang Johari said there are plenty of opportunities for Sarawak to realise its development agenda such as the Autonomous Rapid Transit (ART) system as an urban transportation solution for greater Kuching and other cities later, such as greater Miri.

“We are also collaborating with Huawei in our efforts to spearhead the development of Sarawak’s digital economy. It is a well-known fact that Huawei has the expertise in 5G technology.

“Apart from incorporating 5G technology into the transformation of Sarawak’s economy, Sarawak government is looking at building international internet gateways to connect Sarawak to China and the rest of the world,” he stated in his speech at the Federation of Miri Division Chinese Associations’ Newly Elected Office-Bearers Installation Night held here last night.

“In fact, I have increased the annual financial assistance from RM6 million to RM7 million last year and RM8 million this year.”

At the same time, he stressed Mandarin language is key in strengthening economic ties between China and Malaysia.

Abang Johari said he was very happy that there is an increasing number of natives in Sarawak studying in Chinese schools and able to communicate in Mandarin language.

“This is a good sign as it fits into Sarawak’s long-term goal of becoming a developed state by 2030.

“Such trend is good because if you want to go to China and develop economic ties, it will be an asset if you know the Mandarin language.”

Commenting on the federation, he was informed that the federation’s office-bearers were represented by the various Chinese clan’s associations and Chinese-based organisations in Miri.

“In Sarawak, every division has various Chinese clans, cultural, social and recreational associations. I have personally attended a number of events organised by some of them.

“In some of the events, they have also invited their clans or counterparts from outside Sarawak to participate. There were a few big occasions where there were participants from China, Taiwan, Singapore, Indonesia, Thailand, Philipines, Brunei and from various states in the country.

“Such events are also helping to promote Sarawak tourism and directly bringing visitors to Sarawak. This is good for Sarawak economy.”

He pointed that the Chinese community all these years had contributed a lot to the development of Sarawak through their skills, hard work and entrepreneurship in economic activities.

He also appreciated that various organisations have been acting as a bridge to channel feedback from the people to the government and vice versa.

“We need continuous flow of information both ways in our common effort to solve issues affecting the people and this kind of cooperation between the government and the people can go a long way in ensuring the progress, stability and prosperity of Sarawak.

“Sarawak government also appreciated the hard work that the federation has put in to strengthen the goodwill, harmony and the unity among various communities in Sarawak.”

As Sarawak is rich in cultures and traditions, Abang Johari assured that the state government is committed to safeguard the harmonious relationship between different races from any treats.

“What I asked of our fellow Sarawakians is for all of us to be united and resilient. We must not be easily swayed or unduly influenced by sweet talks or promises by others from outside to disunite or create misunderstanding among us which will be detrimental to Sarawak’s future.

“Let us all as Sarawakians always stay united together to defend and safeguard oru rights and interests as stipulated in the Malaysia Agreement 1963 together with any other relevant documents related thereto and the Sarawak and Federal Constitutions.”

Among those present were Assistant Minister of Tourism, Culture and Arts Datuk Sebastian Ting and Miri mayor Adam Yii.