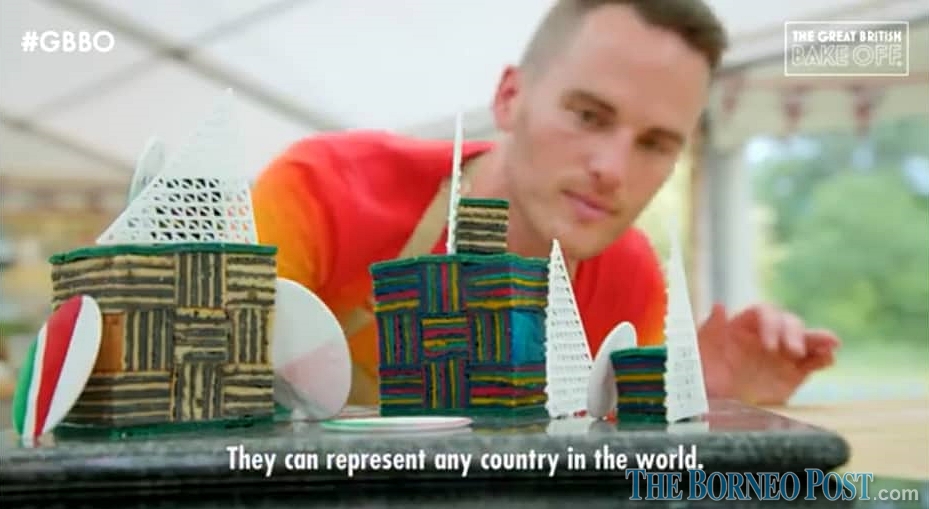 David Atherton, a competitor on the show, unveils his version of the Sarawak layer cake during Episode 7. Screengrab from The Great British Bake Off 2019

Competitors of The Great British Bake Off 2019 were required to wow judges of the show with their take on kek lapis in the Showstopper segment of Episode 7.

In the Showstopper segment, the show’s competitors are required to showcase their creativity in order to impress judges with a professional looking cake that not only has outstanding flavor, but also prove that the baker has the skill and talent to compete with the best.

Judge Paul Hollywood, who is renowned as an English celebrity chef and television presenter, described the Sarawakian layer cake as “one of the most difficult” creations seen on the show.

With its introduction to the widely watched and highly popular British baking competition, Sarawak layer cake has once again established itself as a food icon of Malaysian and Sarawakian culture, having once been established as a protected geographical indication since 2010.

David Atherton created a multi-colored layer cake that showcased how one could experiment with the layers of different colors when baking the Sarawakian staple.

The star baker of the episode was 20-year-old Henry Bird, with his Elegant Present Box version of the layer cake.

Its protected status means that a cake can only be sold as ‘kek lapis Sarawak’ or ‘Sarawak layer cake’ if it is made in Sarawak according to the specifications of the Sarawak Layer Cake Manufacturers Association.

The cake even has its own Wikipedia entry, which details its history and the cake’s almost mandatory appearance at open houses in the state during festivities.