Tuesday, November 24
You are at:Home»World»White House rules out cooperation in Trump impeachment probe 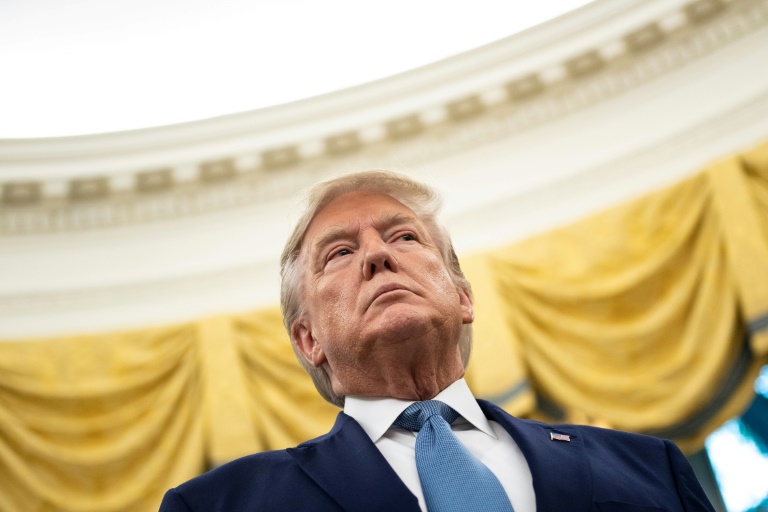 US President Donald Trump says the impeachment investigation of him is a “kangaroo court,” as the White House tells leading Democrats that the president will not cooperate in the probe. – AFP photo

A defiant White House declared war Tuesday against the impeachment investigation of Donald Trump, blasting the process as partisan, illegitimate and unconstitutional and saying neither the president nor his administration will cooperate.

In a fiery letter, the White House threw down the gauntlet to House Speaker Nancy Pelosi and the chairmen of three congressional panels leading the inquiry, challenging them to proceed with their effort to oust Trump despite zero future cooperation.

“Put simply, you seek to overturn the results of the 2016 election and deprive the American people of the president they have freely chosen,” White House counsel Pat Cipollone wrote in an eight-page letter.

“Your inquiry lacks any legitimate constitutional foundation, any pretense of fairness, or even the most elementary due process protections,” he said of the probe, which is weighing whether Trump abused his office by seeking a corruption probe in Ukraine of his rival Joe Biden.

“President Trump cannot permit his administration to participate in this partisan inquiry under these circumstances.”

The White House’s open defiance set Washington on a path toward a constitutional crisis and into unknown territory, with the potential for a court showdown just as the nation gears up for the 2020 election.

Its chief objection was the fact the House of Representatives had not held a formal vote to launch the inquiry.

Democrats say it is not needed because the impeachment process is in its earliest stages, equivalent to gathering evidence for an indictment.

Only afterward would the Democrats call a vote. If a majority of House members back impeachment, the matter shifts to a trial in the Senate, currently controlled by Republicans.

The letter capped a day of explosive developments that included Trump barring a key witness, Ambassador to the European Union Gordon Sondland, from speaking to Congress — calling it a “totally compromised kangaroo court.”

In response, Democrats slapped Sondland with a subpoena that “compels” him to appear on October 16.

The top Democrat in Congress told reporters preventing Sondland from testifying shows that “the president is obstructing Congress from getting the facts that we need.”

Biden, the former vice president who is seeking the 2020 Democratic nomination, joined the chorus of condemnation, tweeting that Trump “must stop stonewalling Congress.”

Sondland, a major donor to Trump’s 2016 presidential campaign, was one of a handful of US diplomats on a text message chain between July and September that go to the heart of the investigation.

The messages involving Trump’s personal lawyer Rudy Giuliani show them coordinating to pressure Kiev into investigating Biden, as the country sought US military aid and access.

House Intelligence Committee chairman Adam Schiff said investigators have learned that Sondland has text messages or emails on a personal device that are “deeply relevant” to the probe, but that State is withholding them.

Lawmakers have an opportunity on Friday to hear from another key witness in the Ukraine scandal: former US ambassador to Kiev Marie Yovanovitch, who is scheduled to appear before the House Intelligence Committee.

US media has reported that Trump removed her from her post because she opposed his efforts to get Ukraine to investigate Biden.

It was unclear whether Trump will block Yovanovitch’s testimony.

Following the White House’s letter, members of the Trump administration will not be authorized to testify in Congress and will ignore subpoenas, a senior administration official, speaking on condition of anonymity, told reporters.

He insisted that the White House was “definitely avoiding saying there’s no way we’d ever cooperate,” but he declined to discuss “hypothetical situations” in which a change might come.