Wednesday, April 8
You are at:Home»News»Sharks being openly sold in Miri market 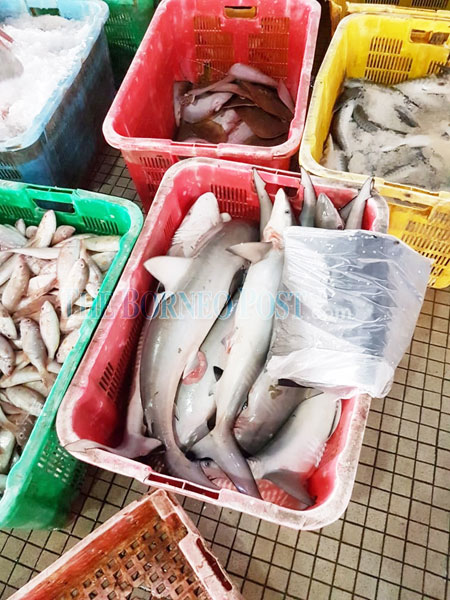 Photo shows the sharks being sold in a market.

MIRI: Environmentalists have called for the relevant authorities to urgently give due protection to sharks after they were found to be openly sold in a market here.

Malaysian Nature Society Miri Branch chairman Musa Musbah said currently there are loopholes in the existing federal and Sarawak laws on the protection of sharks.

“Although Malaysia is a member in the Convention on International Trade in Endangered Species of Wild Fauna and Flora (Cites), Malaysia seems not listed among countries that make sharks a protected species.

“Sarawak too should upgrade its WLPO1998 (Wild Life Protection Ordinance 1998) to the current situation,” he said yesterday following photographs of sharks on sale being widely circulated on WhatsApp.

He said the majority of European countries have listed sharks as totally protected species, while in Sarawak fishermen can take advantage of the loopholes in the law.

Musa explained that fishermen cannot intentionally catch fully protected marine wildlife like Manta rays or Hammerhead sharks, but if they are accidently caught, the catch can be landed.

A concerned environmentalist, who wished to remain anonymous, said the Sarawak government needs to act fast.

“The shark population offshore Miri seems to be less and less. And what is worrying us, we can see foreign trawlers even doing illegal fishing within the Miri-Sibuti Coral Reef National Park, offshore Miri.

“When we inform the enforcement agencies about it, when they came, normally the foreign trawlers have gone away,” he said.

As of press time, the relevant government agencies would not comment on the issue.