Wednesday, August 5
You are at:Home»Business»Azmin: Khazanah’s divestment proceeds not to pay govt debts 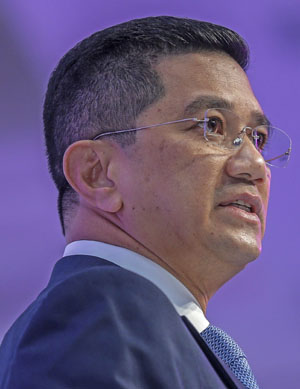 He said Khazanah would usually use the divestment proceeds to undertake new investments as well as pay its debts that are almost due.

“The only payments that the government received from Khazanah are in the form of annual dividend and taxes,” he said during a question-and-answer session at the Dewan Rakyat yesterday.

Subsequently, Khazanah managed to reduce its debt by RM8 billion to RM47 billion and the value is expected to continue to decline to RM30-RM40 billion over the medium term, he said.

“The government is confident Khazanah will be at a stronger position to continue to improve its financial performance and contribute to the country’s economy.

“In line with Shared Prosperity Vision, Khazanah investment strategy will be adjusted towards the new industry that has high value-added and gives a direct impact to boost Malaysia’s economy, increases people’s income and creating high-income jobs as we enter high technology era and developed country,” said the minister.

He said that in reply to a question from Datuk Seri Ahmad Hamzah (BN-Jasin) who wanted to know the latest status of Khazanah’s financial performance and the value of divested shares, assets and interests undertook by the sovereign wealth fund since Pakatan Harapan took over the federal government until now.

According to Azmin, divestment exercise was not out of the ordinary for any local or international strategic investment firm.

He said during the administration of former premier Datuk Seri Najib Tun Razak, Khazanah had disposed of 84 assets between 2009 and April 2018.

The proceeds were utilised to pay off debts that resulted from non-strategic investment losses and to cover the cost of impairment of assets, he added. — Bernama