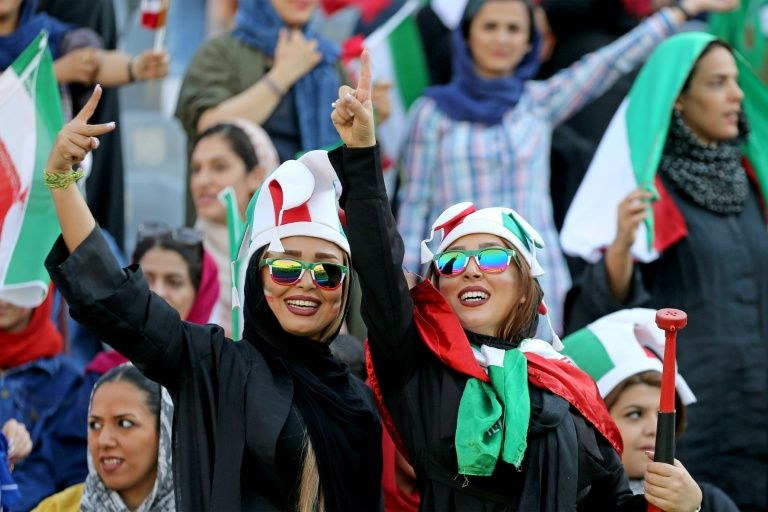 Iranian women freely attend a football match in their ultra-conservative country for the first time in around four decades. AFP Photo

TEHRAN: Waving flags and snapping selfies, thousands of Iranian women on Thursday attended a football match freely for the first time in decades, after FIFA threatened to suspend the country over its controversial stadium restrictions.

Elated female fans wore the national green, white and red flag around their shoulders and over their hair as they streamed into a tiny section of Tehran’s 100,000-capacity Azadi Stadium for Iran’s 2022 World Cup qualifier against Cambodia.

Some donned sporty hats over their headscarves, while others painted their faces with the colours of the flag.

Their beaming smiles underscored a day that felt victorious for Iranian women, even before the match began.

And with every goal the Iranian team scored, the cheers in the women’s section grew louder.

By the middle of the second half, Iran was leading with a blowout of 9-0.

For nearly 40 years, the Islamic republic has barred female spectators from entering football and other sports stadiums, with clerics arguing women must be shielded from the masculine atmosphere and sight of semi-clad men.

That came after the death of Sahar Khodayari, who set herself ablaze last month outside a court in fear of being jailed for trying to attend a match.

Dubbed “Blue Girl” because of the colours of the club she supported — Esteghlal FC — she had reportedly been detained last year when trying to enter a stadium dressed as a boy.

Her death sparked an outcry, with many calling for Iran to be banned and matches boycotted.

Around 4,500 women managed to get their hands on tickets for Thursday’s match, which was thinly attended overall, with only some 10,000 spectators in total.

Even before the starting whistle blew, female fans cheered joyfully as the name of each Iranian player was announced over the loudspeakers, an AFP journalist at the stadium said.

But many women who were unable to get tickets in time for the game were left disappointed.

On previous occasions, attendees have been handpicked by the authorities.

Saluting the move, pro-reform newspaper Sazandegui published a photograph of two female football supporters, coupled with the headline: “The women of freedom.”

For some men too, Thursday’s game was worthy of celebration.

“It’s a great feeling that we’re here together, finally. We only wish this can continue in the future,” a male fan told AFP.

Previous ArticleBill to repeal death sentence to be tabled in March next year
Next Article Hail King James: sport reigns for a night at China NBA game