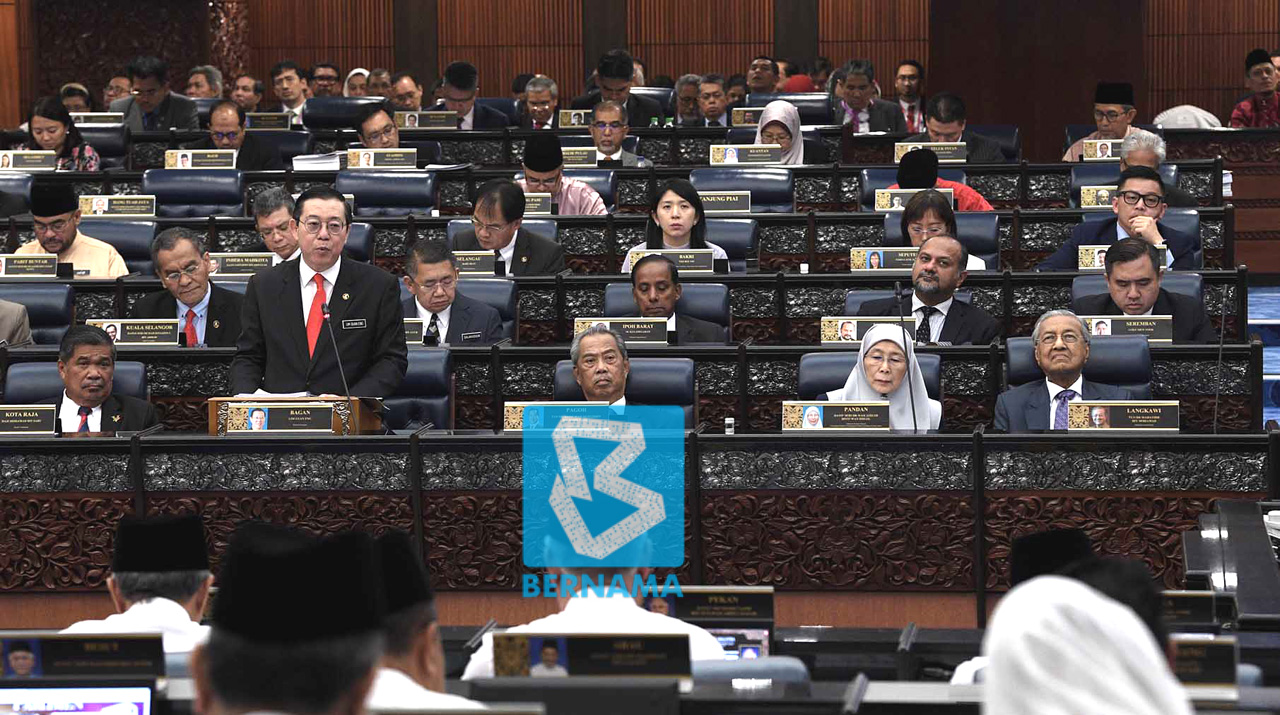 KUALA LUMPUR: The government yesterday proposed a budget for 2020 that is set to drive economic growth so that the country’s yields can be enjoyed by all the people without compromising the government commitment to restore the nation’s fiscal health.

Finance Minister Lim Guan Eng said Budget 2020, which he tabled in the Dewan Rakyat, is a growth-centric budget with precisely-designed measures to optimise the impact on economic growth, job creation and structural change.

The budget will be implemented without jeopardising the government commitment to achieving gradual fiscal consolidation despite having inherited debts and liabilities to the tune of RM1.1 trillion of the previous administration, he said.

The allocated budget expenditure is RM19.5 billion more than this year’s RM277.5 billion, after excluding the one-off allocation for outstanding GST (Goods and Services Tax) and income tax refunds.

Lim said the government expects to collect RM244.5 billion in revenue in 2020, an increase of RM11.2 billion from 2019, after excluding the one-off Petronas special dividend of RM30 billion.

As a result of the budgetary measures, the Malaysian economy will remain resilient going forward – with GDP expected to grow by 4.7 per cent this year and improving to 4.8 per cent in 2020 while inflation is expected to remain well-anchored at two per cent in 2020, he said. 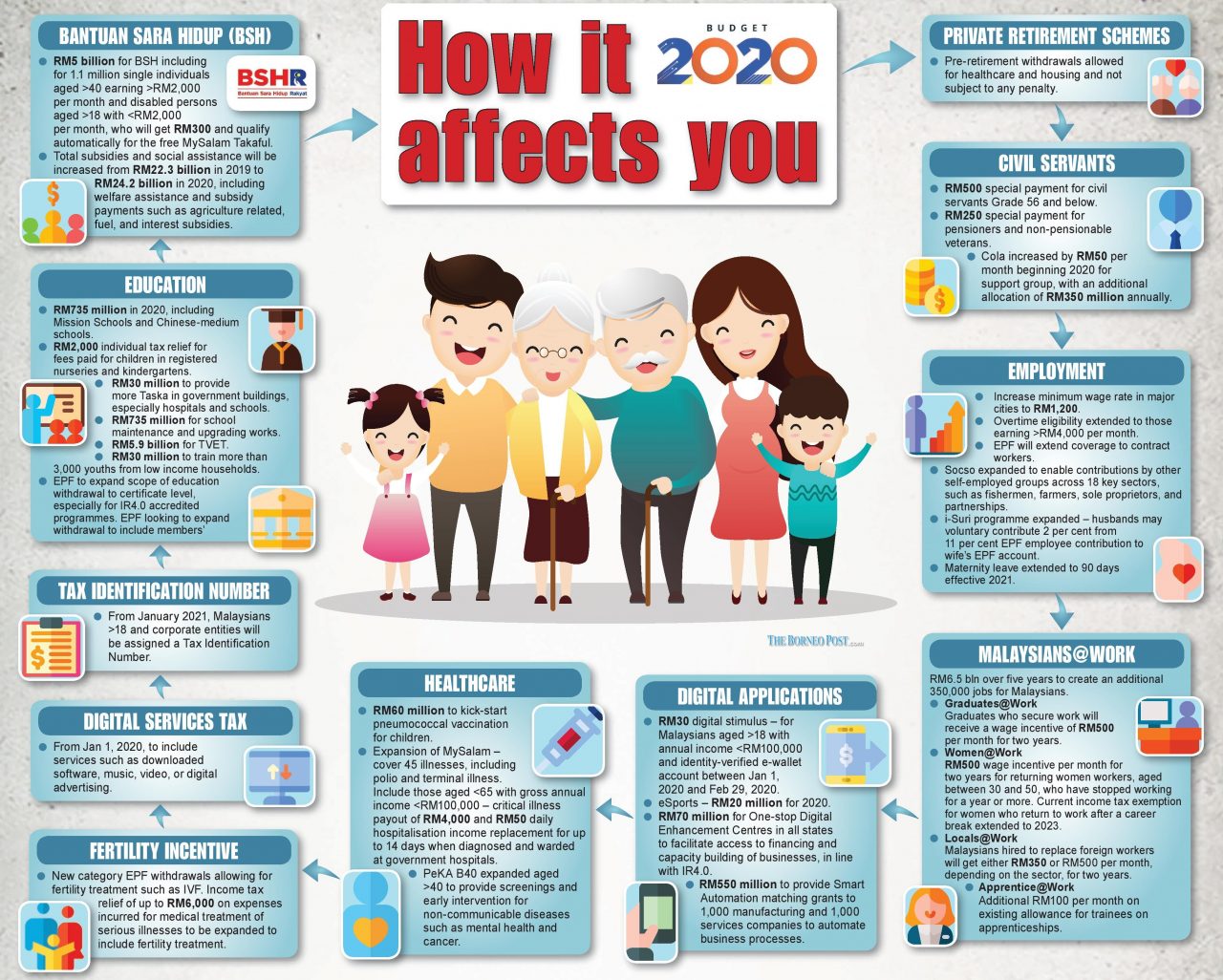 Concerned that there were over 500,000 unemployed Malaysians in 2018, of whom roughly 140,000 are graduates, the government will launch the Malaysians@Work initiative aimed at creating better employment opportunities for youth and women and reducing the country’s over-dependence on low-skilled foreign workers, he said.

At the end of 2018, there were officially 2.2 million foreign workers, or 15 per cent of the national labour force of 15 million people, in the country.

“The government anticipates that the Malaysians@Work initiative will cost RM6.5 billion over five years and create an additional 350,000 jobs for Malaysians and reduce foreign workers dependency by more than 130,000,” said Lim.

He said the Pakatan Harapan government is committed to improving livelihoods, particularly for lower income groups and, as such, proposes to increase the minimum wage rate in major cities to RM1,200 per month effective 2020.

Lim said the government is committed to providing quality education at different stages of life for the people and in investing in ‘the future of our children’ and, as such, again proposes the largest allocation, of RM64.1 billion, to the Education Ministry, including for the upgrading of schools and mainstreaming TVET (Technical & Vocational Education & Training).

He said RM16.9 billion would be allocated for the Home Ministry and RM15.6 billion for the Defence Ministry.

Up to RM10.9 billion would be allocated for rural development.

“A country can only be united if our economic development is inclusive regardless of race, religion, geographical location and background.

“The federal government strives to defend and empower all inclusively and not only one group exclusively,” he said.

In easing the financial burden on the people, he said the allocation for total subsidies and social assistance would be increased from RM22.3 billion in 2019 to RM24.2 billion in 2020, including welfare assistance such as Bantuan Sara Hidup and subsidy payments such as agriculture related, fuel and interest, as well as ensuring that all the people have access to quality healthcare.

He also said the government would continue to take care of the needs of smallholders, settlers, farmers and fishermen by providing various incentives, financial assistance and facilities valued at millions of ringgit.

There was good news for the 1.6 million civil servants.

Lim announced a special payment of RM500 for those on Grade 56 and below and a RM250 special payment for government retirees and non-pensionable veterans, to be paid before the end of this year.

The Cost of Living Allowance (COLA) would be increased by RM50 per month beginning 2020 for the support group.

For the first time, civil servants would be allowed early redemption of accumulated leave for up to 75 days as replacement pay for those who have at least 15 years of service.

In appreciation of the sacrifices and heroism of the armed forces, Lim said the government would accord a one-off payment of RM500 to the 70,000 holders of the Pingat Jasa Malaysia, with an allocation of RM35 million.

Some 14,400 Fire and Rescue personnel would receive a special allowance of RM200 a month, amounting to RM35 million, in recognition of their service, especially answering emergency calls from all over the country day and night, he said.

When tabling the budget, Lim slammed the previous administration, saying that Malaysia failed to achieve its dream of becoming a developed nation in 2020 because of that government’s massive financial scandals, corruption and mismanagement. — Bernama