Wednesday, June 23
You are at:Home»News»Masing suggests ‘fair re-adjustment’ in Budget 2020 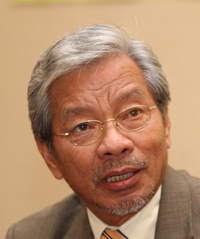 “The Budget 2020 unveiled the true colours of the PH (Pakatan Harapan) government, and how it treats Sarawak in accordance with its ‘Shared Prosperity Vision 2030’,” he said in a statement yesterday.

Masing, who is Parti Rakyat Sarawak (PRS) president, also pointed out: “Sarawak is an equal partner with Malaya (Peninsular Malaysia) as agreed in the Malaysia Agreement 1963 (MA63), and as such, the financial allocations in the Budget must reflect the fair partnership that had been agreed between all the parties during the formation of the Federation of Malaysia.”

“This glaring difference is undoubtedly by design, and it does reflect the PH government’s attitude towards Sarawak, to which without qualms, the PH government has allocated an unequal wealth distribution between the three nations that had formed the Federation of Malaysia.”

Masing said the Budget 2020 was supposed to reflect the ‘Shared Prosperity Vision 2030’, but he observed that the PH government had a different idea as it wanted to show its true colours.

Given this, he said the ‘Shared Prosperity Vision 2030’ was merely rhetoric.

“(Prime Minister) Tun (Dr Mahathir Mohamad) also, in his ‘Malay Dilemma’ book, stated that ‘Melayu Mudah Lupa’ (the Malays easily forget), and true to the core, the PH government did forget the fact that each day about 850,000 barrels of oil are being produced in Sarawak,” lamented Masing.

He said all that Sarawakians wanted was a fair share of funds so that they too could enjoy better infrastructure facilities like their counterparts in Peninsular Malaysia.

The federal government, according to him, has failed to address the imbalance in development between Peninsular Malaysia and Sarawak in Budget 2020.

“Thus, we wonder what the government means by its ‘Shared Prosperity Vision 2030’.

“The bottom line is, Sarawakians know in their hearts that the Budget 2020 is nothing else but more of like the ‘anak-tiri (stepchild) policy’ and not the ‘Shared Prosperity Vision 2030’,” stressed Masing.