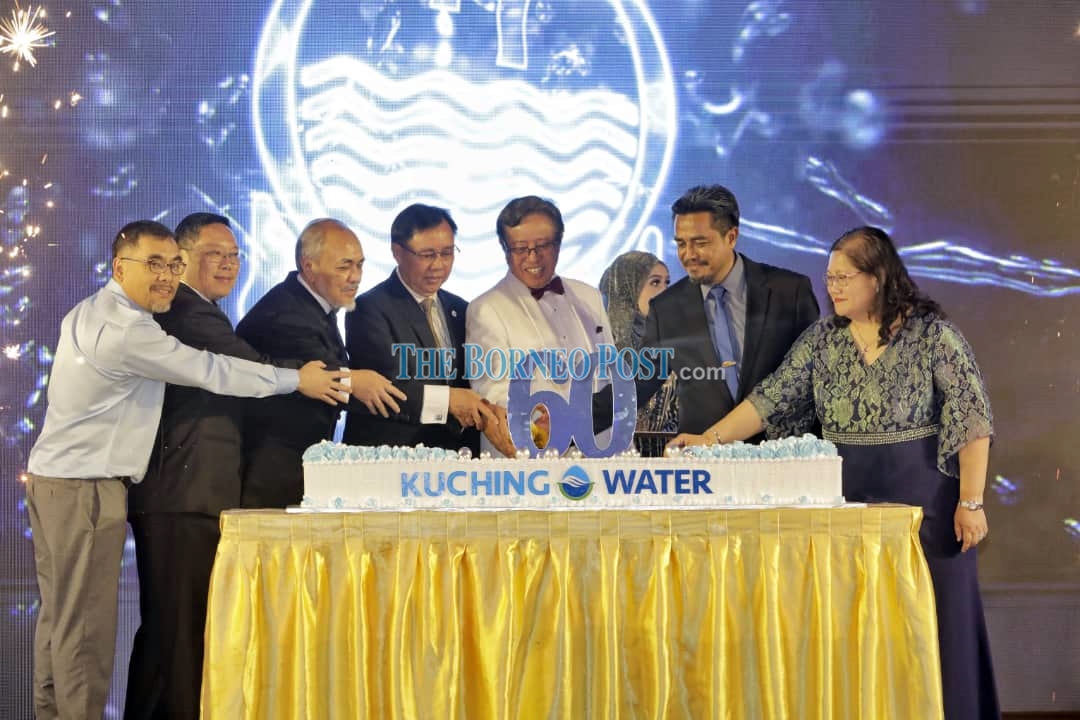 Abang Johari (fifth left) cuts an anniversary cake with Dr Rundi (fourth left), Asfia (third left) and others during the event. — Photo by Chimon Upon.

The Chief Minister said as long as he is Chief Minister, he will do everything to make sure that all Sarawakians get proper water supply, as he believes that a good water supply system is important for Sarawak if the state wants to become a developed state.

However, he opined that the effort should not be shouldered by the Ministry of Utilities and its agencies alone, and that other agencies such as the Public Works Department (JKR) play a crucial role too, especially when it comes to providing water to the rural areas.

“The state government had previously approved an allocation of RM2.8 billion to upgrade rural water supply as we know that, without water, it will affect agriculture and industries which are important sectors in the state,” he said when officiating the Kuching Waterboard (KWB)’s 60th anniversary dinner held at a local hotel here last night.

As for the future of KWB, Abang Johari hoped that the agency under the Ministry of Utilities would review the development of water supply not only in Kuching but also in its nearby areas.

“The KWB needs to re-examine the management of water supply including the Lundu, Bau and Samarahan areas as the population is steadily growing. Water supply agencies like KWB need to find new water sources and they can do so by using new technologies including data centers,” he said.

Abang Johari pointed out that one of the reasons why the government approved the construction of rural bridges such as the Batang Lupar, Batang Kemena and Batang Lassa was to help with providing water supply to rural areas.

With the construction of bridges, he said the is no need for the government to create underwater water pipelines, as the pipes can be laid across the river by attaching them to the bridge.

“The old Satok suspension bridge was the first to have such design as it used to have a water supply pipeline attached to it. The pipeline supplied water to residents of Kuching from Matang area many years ago,” he added.