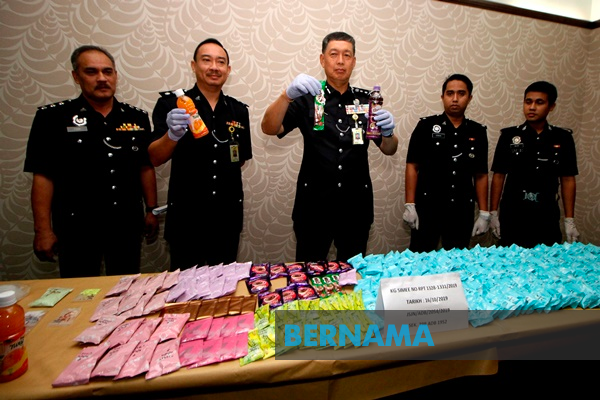 IPOH: Police arrested an e-hailing driver believed to be a drug-trafficker and seized various types of drugs worth RM753,295 in a raid on a shophouse in Kampung Simee here yesterday.

Perak deputy police chief Datuk Lim Hong Shuan said the 24-year-old man was picked up at 2 am by a team from the Narcotics Criminal Investigation Department of the Perak police contingent headquarters.

“Police found 245 drink packets containing drug powder weighing 15 kg, 50 ecstasy pills, 11g of ketamine and 2.77-litre of liquid substance believed to be drugs in a room of the double-storey shophouse.

“Also seized were drug packaging equipment and a car estimated to be worth RM45,000,” he told a press conference here today.

Lim said the suspect was also tested positive for methamphetamine and had a previous criminal record under Section 420 of the Penal Code.

He said the suspect had been remanded for seven days until Oct 22 and the case was being investigated under Section 39B of the Dangerous Drugs Act 1952.

Meanwhile, Lim said a total of 10,050 people had been arrested in the state for suspected drug-related offences from January until September this year.

He said for that period, police had also seized various types of drugs worth RM2.1 million and confiscated assets worth RM5.3 million. – Bernama