Wednesday, July 6
You are at:Home»News»Asfia on Sarawak’s oil and mining rights, imposition of state sales tax 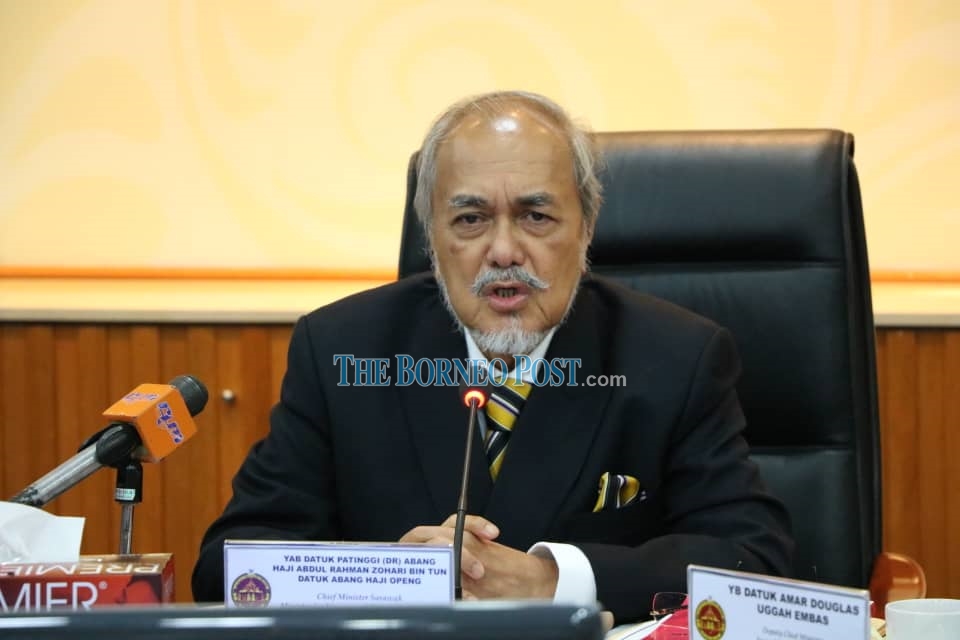 KUCHING: This press statement written by Speaker of the Sarawak State Legislative Assembly (DUN) Datuk Amar Mohd Asfia Awang Nassar today has been published in its entirety. Read the full statement below.

In the past few months, the State Legislature of Sarawak have been visited by Speakers, Senators and Parliamentarians from various states and the Upper House of Malaysia.

The Speakers and Parliamentarians were from the States of Melaka (PKR), Terengganu (PAS), Negeri Sembilan (Amanah) and currently Kelantan (PAS).

The inter parliamentary visits whereby Parliaments of the region visit each other has been the practice and tradition amongst commonwealth countries under the auspices of Commonwealth Parliamentary Association (CPA).

The current visit by the Honourable Speaker of the State Legislative Assembly of Kelantan together with their Public Account Committee is a Parliamentary co-operation and collaboration between states. This is where one learns from each other resulting in the cross politicisation of ideas and practices.

Views had been expressed that the ideology and doctrine of PAS are not acceptable to Sarawak. YAB Chief Minister of Sarawak had unequivocally stated that GPS is not forming a coalition with PAS. And hereby reiterate the stand taken by YAB Chief Minister.

In our meeting with Honourable Speaker of the State Assembly of Kelantan and their Public Account Committee, we shall focus on Parliamentary co-operation and collaboration that transcend partisan polemic. There are the coincidences of circumstances between the State of Kelantan and State of Sarawak.

Like Sarawak, Kelantan is an oil-gas rich state benefits very little from such resources. tinder the policy and philosophy of “shared prosperity” the wealth of the state is carted away resulting in the perpertuation of poverty. Anyone is ever ready and willing to share your wealth and have a lion share of that wealth but by any stretch of any imagination no one is keen to share your poverty.

Further Kelantan had been subjected to full-scale frontal assault and relentless attacks by national ruling parties of v;irious shades and political persuasion for the past 60 years. To this day, its citadd, mosques and Suraus remain in Kelantan still stand.

In the morning on Malaysia Day, 16″‘ September 2019 it was declared in Kuching that the State of Sarawak could suffer the same fate.

The GDP mid budget of Kelantan may be modest compared with the other states of Malaysia, but the political resilience is second to none with the exception of Sarawak.

Their doctrine ossified their stand and the people do not oscillate from one political end of the spectrum to the other.

In a policy of shared prosperity there must be QUID PRO QUO meaning we give you this, you give us that. It is the oil and gas are ours, you carted away with RM660 Billions leaving us with only RM33 Billions. This is grossly unjust and one-sided.

OIL AND OIL FIELDS OF SARAWAK

History, the International Law, the Federal Constitution and State Laws are on our side.

“2. The boundaries of the Colony of Sarawak are hereby extended to include the area of the continental shelf being the seabed and its subsoil which lies beneath the high seas contiguous to the territorial waters of Sarawak.”

“3. Nothing in this order shall be deemed to affect the character as high seas of any waters  above the said area of the continental shelf.”

This is the territory of Sarawak with its land mass and continental shelf, sea-bed and sub-soil at the birth of Malaysia on 16th September 1963.

“The territories of each of the States mentioned in Clause (2) are the territories comprised therein immediately before Malaysia Day.”

The Petroleum Development Act, the Continental Shelf Act 1966 and other related Acts of Parliament had the effect of acquiring Sarawak’s Continental Shelf, sea-bed and sub-soil. However these Acts and  related laws flagrantly violate Article 2 of the Federal Constitution.

Neither the Dewan Undangan Negeri of Sarawak has ever passed a law expressing consent to the alteration of its boundaries,

Nor to our knowledge the Conference of Rulers has consented to the alteration of Sarawak’s boundaries.

If the boundaries of Sarawak have shrunken, confined only to its land mass depriving the state of its original boundaries at the material time Malaysia was formed the burden of proof is on the Federal Government and Petronas that Article 2(3) in the Federal Constitution had been fully complied with.

“The jurisdiction of the Sarawak Government over the continental shelf for the purposes of exploring and exploiting its mineral resources derives from the Sarawak (Alteration of Boundaries) Order-in-Council, 1954, which extends the boundaries of Sarawak to include the adjacent continental shelf, and not from the Oil Mining Ordinance, 1958, which merely confers powers on the Government to enable it to regulate exploration and exploitation of certain mineral resources of the shelf.

“The right to such jurisdiction is now embodied in the 1958 United Nations Convention on the Continental Shelf. The Convention defines the shelf as extending to the depth of 200 metres or beyond that limit where the depth of the superjacent waters admits of exploitation, and contains provision as to the boundaries between the respective shelves of neighbouring countries. There is no intention of exercising jurisdiction beyond the boundaries as defined in the Convention or except for the purposes allowed by the Convention.”

As such the ownership and possession of oil and oil fields belong to Sarawak. Sarawak has right over the oil and the oil fields because the acquisition of Sarawak’s continental shelf was unconstitutional and against the 1958 United Nations Convention.

The oil and oil fields are not in the Federal hands. They belong to Sarawak.

Article 83(1) of the Federal Constitution reads:

Article 83(2) of the Federal Constitution reads:

Sixteen (16) years before Parliament passed the Petroleum Development Act in 1974 and 16 years before Petronas was born also in 1974, Sarawak had passed its Oil Mining Ordinance in 1958.

“(1) Any person found to be exploring, prospecting or mining for crude oil, petroleum or natural gas upon any land or doing any act with a view to such exploring, prospecting or mining on the same and without having received lawful authority so to do under any of the provisions of this Ordinance or in breach of any of the conditions thereof, shall be guilty of an offence”.

Section 8 of the Oil Mining Ordinance, 1958 states – “A licence or lease shall not be assigned without the previous consent in writing of the Governor in Council.”

Section 15  of the Oil Mining Ordinance, 1958 states – “The Governor in Council may grant an oil exploration licence over the lands specified therein subject to the payment by the licensee of the prescribed fee.”

“In return for the ownership and the rights, powers, liberties and privileges vested in it by virtue of this Act, the Corporation shall make to the Government of the Federation and the Government of any relevant State such cash payment as may be agreed between the parties concerned.”

The one and only reason why the Petroleum Development Act 1974 could not be challenged was because it was passed during the time of Emergency (1969 – 2011).

As a Parliamentary Democracy with an open market, Malaysia cannot be forever under an Emergency.

The lifting up of the emergency in 2011 makes the Petroleum Development Act 1974 REDUCTIO AD ABSURDUM.

Article 74 of the Federal Constitution:-

(1) Without prejudice to any power to make laws conferred on it by any other Article, Parliament may make laws with respect to any of the matters enumerated in the Federal List or the Concurrent List (that is to say, the First or Third List set out in the Ninth Schedule).

(2) Without prejudice to any power to make laws conferred on it by any other Article, the Legislature of a State may make laws with respect to any of the matters enumerated in the State List (that is to say, the Second List set out in the Ninth Schedule) or the Concurrent List.

(3) The power to make laws conferred by this Article is exercisable subject to any conditions or restrictions imposed with respect to any particular matter by this Constitution.

(4) Where general as well as specific expressions due in describing any of the matters criumermed in the Lists set out in the Ninth Schedule the generality of the former shall not be taken  to be limited by the latter.”

Article 77 of the Federation Constitution –

“The Legislature or a State shall have power to make laws with respect to any matter not enumerated in my of the Lists set out in the Ninth Schedule, not being a matter in respect of which Parliament lids power to make laws.”

1. Under Item 7 of Part V 10th Schedule of the Federal Constitution Sarawak has the right to impose State Sales Taxes. The subject matter legislated thereon shall be deemed to be under State List [Article 95B(3)].

4. Sarawak has the right to collect revenue as stated in Item 1. Part lll 9th Schedule of the Federal Constitution -“Revenue from lands, mines and forests”.

Article 95B(3) of the Federal Constitution reads:

The operative word “and” must be construed conjunctively and not disjunctively because petroleum originates in Sarawak and the sales take place in Sarawak therefore the State Legislature deems it to be in the State List.

This goes for gambling, crude oil petroleum (CPO) which are in Federal List, but the State imposed taxes on them because they originates from Sarawak and the sales take place in Sarawak.

The Federal Government PONTIFICATES in imposing stamp duties and property gains tax on land transaction in Sarawak which is the exclusive preserve of the state.

-(a) for authorizing the Legislature of the State to make laws as mentioned in Article 76A; or

“A tax to be known as State sales tax shall be charged and collected in accordance with the provisions of this Ordinance on the sale of taxable goods and supply of taxable services  rn the State in the course or furtherance of any business, irrespective of whether or not such taxable goods were made, produced or manufactured in the State.”

Section 7(2) of the of the State Sales Tax Ordinance, 1998 also emphatically stated that: “The revenue derived from the imposition of this State sales tax shall be revenue assigned to the State by virtue of Part V of the 10th Schedule to the Federal Constitution and such revenue shall he paid and credited to the State Consolidated Fund.”

“Where an offence against this Ordinance or any regulations made thereunder has been committed by a company, firm, society or other body of persons, any person who at the time of the commission of the offence was a director, manager, secretary or other similar officer or partner of the company, firm, society or other body of persons or was purporting to act in such capacity shall be deemed to be guilty of that offence unless he proves that the offence was committed without his consent or connivance and that he exercised all such diligence to prevent the commission of the offence as he ought to have exercised, having regard to the nature of his functions in that capacity and to all the circumstances.”

“Prosecution in respect of offences committed under this Ordinance or any regulations made thereunder may be conducted by the Public Prosecutor or any person authorized by him under section 377(h) of the Criminal Procedure Code [Act 593].

“Notwithstanding the provisions of any written law to the contrary, a court of a Magistrate in the State shall have jurisdiction to try any offence under this ordinance and to impose punishment under this Ordinance for any such offence.”