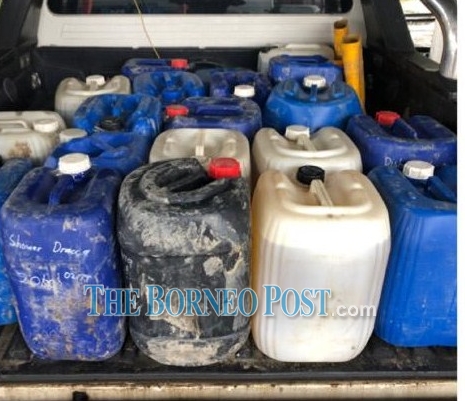 SIBU: Police have arrested a man and seized about 400 litres of diesel oil, including a four-wheel-drive vehicle worth about RM70,872 during an operation at Jalan Helang at about 8.45am yesterday morning.

ACP Shamsol Kassim said a team of seven officers and members of the Intelligence Unit of Sibu Marine Police Region 5 conducted the operation.

“An initial police investigation revealed that the vehicle was carrying 20 jerrycans containing about 400 litres of diesel oil during the surprise check,” he said in a statement.

Separately, in Bintulu, he said they had also arrested another suspect who was believed to be trying to smuggle 400 litres of petrol at Jalan Sibiyu at about 12.30pm on Friday afternoon during a routine inspection.

He said police had also seized the 400 litres of petrol, together with a four-wheel-drive vehicle worth about RM120,800 from the Bintulu suspect.

Shamsol said both suspects could not produce any proof of purchase or any document in relation to the permit to carry the diesel oil.

They were arrested for committing an offence under the Supply Control Act 1961 for possession of unlicensed controlled items.

He said both cases would be handed over to the local Ministry of Domestic Trade and Consumers Affairs for further investigation.