Wednesday, June 23
You are at:Home»News»Penguang: I have never sacked any tuai rumah 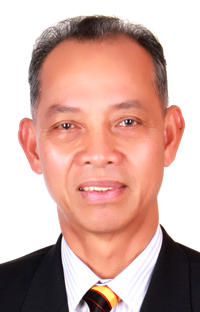 MIRI: Assistant Minister of Local Government and Housing Datu Dr Penguang Manggil has denied ever having sacked or terminated the services of any tuai rumah in his constituency of Marudi.

He also challenged PKR Baram chairman Roland Engan and Tuai Rumah Joshua Dungkong to list the names of all tuai rumahs or headmen who claimed he was responsible for the termination of their services.

“As far as I know, and in the name of God Almighty, I have neither sacked nor terminated the service of any tuai rumah in my constituency.

“Both Roland and Joshua, who claim to champion the people and the so-called ‘sacked’ tuai rumahs, are completely ignorant of the procedures of the appointments and reappointments of ‘ketua kaum’ including tuai rumah,” said Penguang yesterday.

The Marudi assemblyman was responding to an allegation by Joshua who, in a press conference here recently, said there were more than 20 tuai rumahs in Marudi whose services were terminated without notice, including himself as the headman of Rumah Joshua Dungkong in Sungai Malang, Beluru.

The tuai rumahs are from Bakong, Peking, Asam Paya, Jegan and Beluru, he said.

Joshua also stated that the affected tuai rumahs are seeking the state government’s intervention in resolving the matter, adding the 20 are ‘hardcore’ supporters of Gabungan Parti Sarawak.

Penguang meanwhile said the appointment of tuai rumahs, village heads and kapitans follows a standard operating procedure which has been in place for a long time and practised throughout the Sarawak.

He said all ketua kaum are elected by their own longhouse community, with their first appointment being for four years, followed by reappointments for a period of either one or two years.

“I wish to remind Joshua that the reappointment is not automatic; it is up to the longhouse community whether they want to re-nominate the incumbent or replace them with another person
through the same election procedure.”

He also responded to another claim by Joshua that some longhouses in Marudi had two tuai rumahs due to disputes between Penguang’s supporters and those of a former Marudi assemblyman, by stressing that this was the very reason why he (Penguang) advocated the democratic election of tuai rumahs, where the majority rules.