Saturday, February 22
You are at:Home»News»‘S’wak govt collaborates with counterparts in Indonesia, Brunei and Sabah to contain rabies spread’ 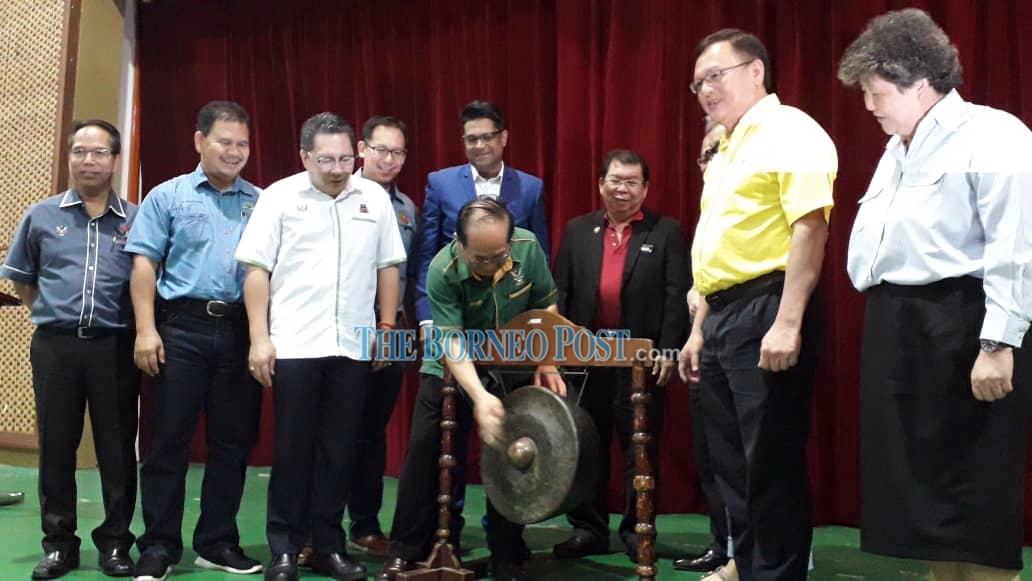 Uggah (fourth right) beats the gong to mark the launch of the World Rabies Day in Kuching.

KUCHING: The Sarawak government is still collaborating with its counterparts in Indonesia, Brunei and Sabah to contain the spread of rabies, said Deputy Chief Minister Datuk Amar Douglas Uggah Embas.

He said the Sarawak government will continue to exchange information with their counterparts in Indonesia and at the same time further strengthen their border control.

He said part of the vaccination and targeted removal programmes are going to be focused along the borders later on to make sure that the migration of animals is put under control.

“We have also put the rule for the local plantations to ban their workers from bringing dogs when they come to work in Sarawak.

“We also control dogs movement even between divisions because there was case where the adopted dog from Sibu caused a fatality in Mukah,” he told reporters after launching the state level World Rabies Day here today.

Uggah, who is the chairman of Sarawak State Disaster Management Committee, said Sabah has sent some of their veterinary officers to Sarawak to assist in the vaccination programme, while the collaboration with Brunei is more for information sharing.

He said the Sarawak government and it’s Bruneian counterpart will try to make sure that the border will be protected.

“We are lucky because there is no positive cases in Limbang so far,” he said.

He said although there is still no positive case in Limbang, they will still conduct vaccination and removal operation.

Uggah said the authorities in Sarawak have so far vaccinated around 65 per cent of the dogs or 150,000 dogs throughout Sarawak.

He said they are intensifying the programme, and are now at the last phase of the special operation, which begun on March 1.

The operation, he noted, involved the military, the police, local councils and health department.

“We bring the army and the police for security reason because we are carrying out a sweeping programme.

“Sweeping means we go from house to house, to make sure that all the dogs are vaccinated and the targeted dogs are removed. This is one way to reduce the career and increase the number of dogs vaccinated,” he said.

In stressing on the importance of vaccination, Uggah said the state government will continue to conduct vaccination programmes annually until the state is declared rabies free.