Sunday, November 27
You are at:Home»News»Sarawak to commemorate Japan Surrender 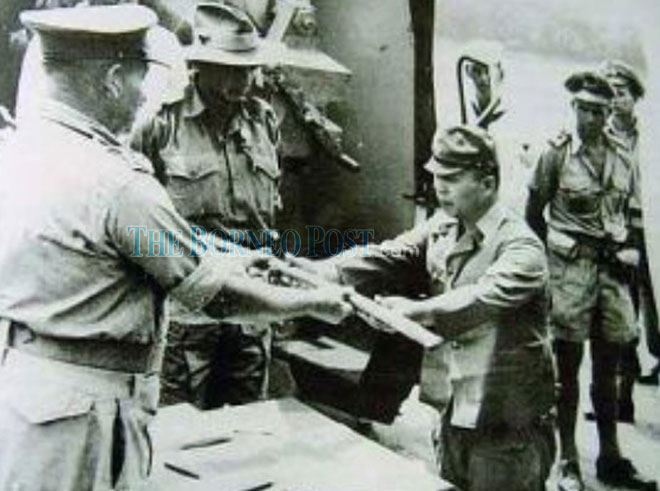 Yamamura presents his sword to Eastick on board the HMAS Kapinda on Sept 11, 1945.

KUCHING: The year 2020 will usher in the 75th anniversary of the Second World War (WW2) and the Japanese Surrender which affected the lives of many veterans and their families.

Sarawak Tourism Federation (STF) led by its heritage advisor Dato Lim Kian Hock, together with representatives from Sarawak Museum and Kuching South City Council, recently made a recce of Pending Point which was the site where a local ceremony took place, leading to the liberation of Sarawak and release of prisoners of war as well as women and children civilian internees from the Batu Lintang Camp on September 11, 1945.

The surrender document was signed by the Japanese Army Commander Major General Hiyoe Yamamura on board the Australian naval ship Kapunda which was anchored at Kuap anchorage of Sungai Sarawak at Pending Point.

The surrender document was received by Australian Brigadier General Sir Thomas Eastick in the afternoon of September 11, 1945. 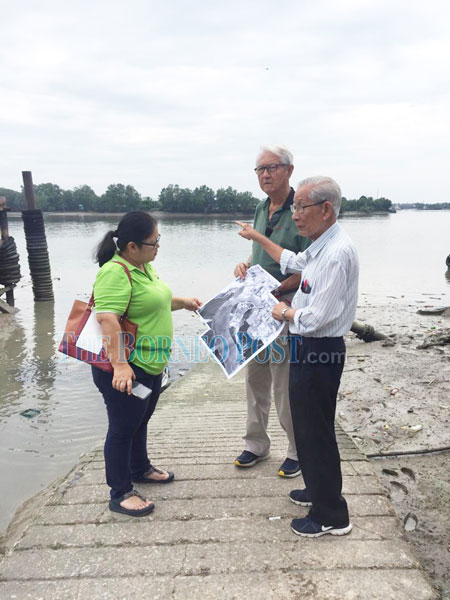 Lim (right) and others pause during a recent recce to Pending Point.

Lim revealed that the historical ceremony was unfortunately not well known in Sarawak’s wartime history.

He noted that the event was an inspiring moment according to the eye-witness report by Lt (Jg) Herbert H.Toder USNR and Lt. Doyle C Barnas of U.S.S which read:

“The city itself appeared untouched from the damaging effect of bombing or bombardment. There were many brick buildings, and a coal crane overhanging the dock but it appeared as though it hadn’t been used by the Japs at all.

“Our preliminary work of sizing up the suitability of wharf accommodations having been accomplished, we returned at 1330 to the HMAS Kapunda and moored alongside awaiting the surrender ceremony which was to take place aboard that ship at 1400.

“HMAS Kapunda was anchored in the Kuap anchorage off Pending nine miles from Kuching with Brigadier Eastick who was to receive the surrender, embarked aboard.

“The Jap commanding general, Major General Hiyoe Yamamura was to appear at 1400. When at that time he did not arrive Australians sent one of their crash boats to bring him from the dock.

“The boat returned with the Jap general’s Chief of Staff, Lt. Col. T. Fujita, who informed Brigadier Eastick through his Brigade Major that Yamamura was indisposed and wished Fujita to speak for him.

“Brigadier Eastick, with no hesitation in his voice, vetoed this arrangement and ordered Yamamura to report aboard immediately.

“In spite of this stall General Yamamura proved to be waiting at Pending dock, and returned in the Australian crash boat with two of his staff and interpreters.

“Their uniforms were neat and well pressed, comparing most favourably with the Australian surrender dress.

“He and his staff were emotionless when they appeared before Brigadier Eastick for the surrender ceremony.

“The ceremonials were simple. The location was on the forecastle just forward of Kapunda’s superstructure and abaft a 4” gun mount.

“A small table 3 ½ square, draped with the British Union Jack, stood alone off to the port from the center of the four pens were placed on top of the table. Nearby at either side of the foredeck were guards of honour from the Australian Army, and Navy.

“The official guests, representing the Australian Army and Navy and the US Navy stood facing inboard on the port side. The announcer was in a good position to hear the words used, and record the scene for posterity.”

Lim said that a nostalgic Diamond Jubilee event will be held next year.

“However, it is also a time of important reflection in that with greater understanding of the cruelty and atrocity of war or conflict, we could learn the responsibility and the essence of peace and community harmony that we enjoyed today in our midst,” he said.

STF will be re-living this wartime heritage as part of the anniversary commemoration.

It is expected to kick off in Bario Highlands with the commemoration of WW2 Commandos Landing for Operation Semut led by Major Tom Harrison.

The families of General Sir Thomas Eastick and General Wootten are among those expected to attend.