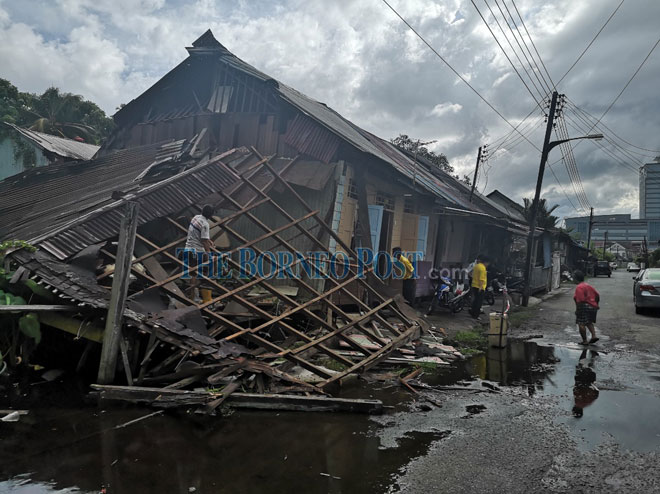 SIBU: A combination of heavy rain and strong wind is believed to have caused a vacant wooden house at Jalan Amoy here to collapse yesterday afternoon.

Sibu Municipal Council (SMC) Building Control and Town Beautification standing committee chairman Councillor Joseph Chieng, who happened to be in the vicinity to check on unstable structures following feedback from members of the public, said the structure had already collapsed by the time he arrived.

“It is most fortunate the house was unoccupied,” he said, adding he had contacted the council to seal off the area in the interest of public safety.

He said SMC has identified several ‘unsafe’ buildings in Sibu, and urged the public to notify the council of such buildings so that further action can be taken.

Meanwhile, SMC chairman Clarence Ting in a Facebook post cautioned that what happened at Jalan Amoy could happen to any structurally unsound building.

“Council will start to look into those buildings that are showing signs of collapse and take action to demolish them. Today (yesterday), fortunately, no one was injured, we can’t allow with human lives be used as a game of chance. I will ask council to survey all these (unsafe) buildings and proceed to dismantle them for public safety,” Ting said in the post.