Wednesday, February 8
You are at:Home»News»Heftier fines for habitual offenders, reward for informers under amended Sarawak environment law
For the freshest news, join The Borneo Post's Telegram Channel and The Borneo Post on Newswav. 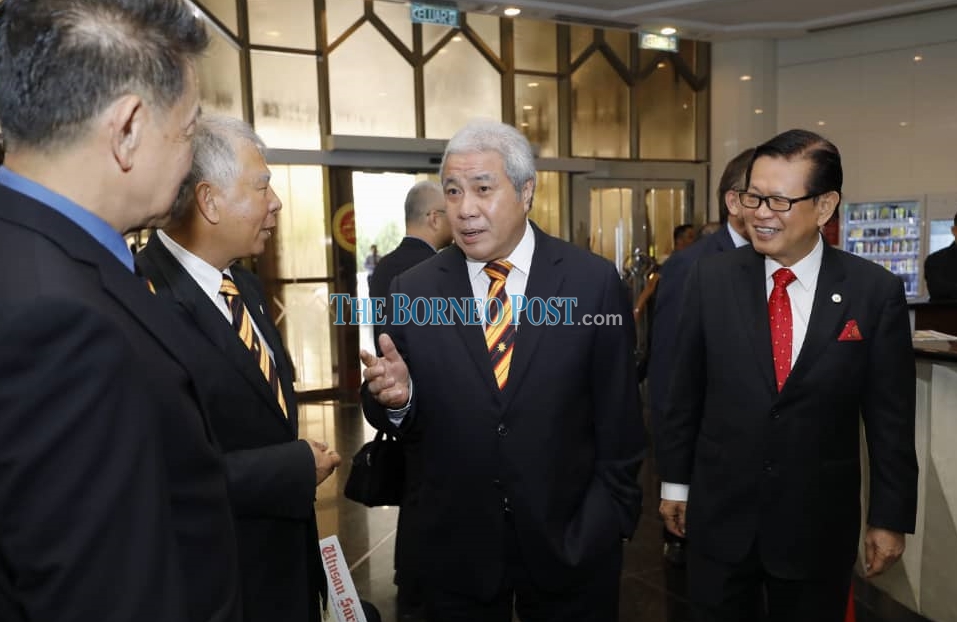 Awang Tengah (centre) provisions relating to penalties and powers of the NREB would be enhanced to combat non-compliance of environmental laws in the state. Photo by Chimon Upon

KUCHING: The Natural Resources and Environment (Amendment) Bill, 2019, has been passed in the State Legislative Assembly today to strengthen the regulatory mechanism for sustainable management of natural resources and the protection of environmental quality.

The amended Natural Resources and Environment Ordinance (NREO) will provide a stiffer penalty for habitual offenders and rewards for informers besides better protecting their identity.

Deputy Chief Minister Awang Tengah Ali Hasan, when tabling the BIll, said provisions relating to penalties and powers of the Natural Resources and Environment Board (NREB) would be enhanced to combat non-compliance of environmental laws in the state.

He said the amendment to the NREO also aimed at expanding the law relating to open burning particularly those related to commercial farming.

Awang Tengah pointed out that the lack of accountability and poor compliance are the main causes of local haze pollution, water contamination and land degradation.

“As such a deterrent penalty should be enforced on habitual offenders who intentionally cause environmental pollution, by imposing higher penalty for offences on illegal open burning, land and inland water pollution,” he said without going into the details of proposed penalty.

In this regard, maximum penalties are increased for certain offences with the objective that they would deter repeat and future offenders.

To further enhance the enforcement of the NREO, he pointed out that the Bill provided for the protection of informers as well as provisions for rewards.

“Proactive societal involvement in managing and protecting our environment are possible by leveraging on modern technology and provision for adequate appreciation.

“Therefore, this proposed amendment aims to provide adequate protection and incentives for public and individuals who come forward in reporting and providing information on any irresponsible acts that caused land degradation, water and air pollution,” he said.

He assured that the amendment would not affect the traditional farming practices of slash and burn by rural communities in Sarawak as the Environment Controller has powers under Section 10 of the Principal Ordinance to make the necessary Orders to that effect.

Awang Tengah also noted that “environment” was not listed in the Federal, State or Concurrent Lists of the Federal Constitution and as such, Sarawak has the residual power to legislate on matters relating to the environment.

The Urban Development and Natural Resources Minister (II) said the Bill was timely in ensuring that the implementation of planned socioeconomic transformation projects and development programmes will be carried out in a sustainable manner, in line with the United Nations Sustainable Development Goals.

He said with the amendment, environmental agencies like NREB will have the necessary regulatory power, adequate resources and capacity, leveraging on green technologies to mitigate environmental risks and ensure ecological sustainability.

The amendment, he said, was necessary to help prepare the NREB, under the devolution of powers in line with the Malaysia Agreement 1963, to accept additional responsibilities in managing the environment.