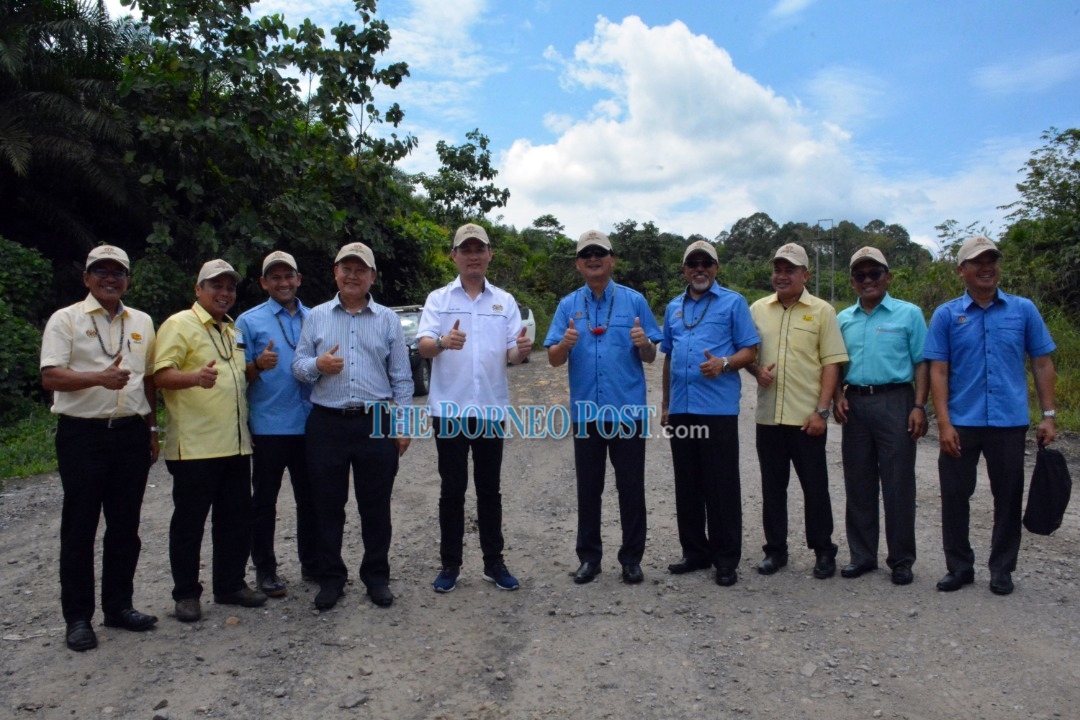 Baru (fifht right), senior officers from the Public Works Department and Senator Alan Ling (sixth right) giving their thumb’ up to the SSLR project which was launched yesterday.

LAWAS: Limbang folk should not be worried that the town will become a ‘ghost town’, despite the federal government’s decision to put on hold the Second Phase of Pan Borneo project, said Works Minister Baru Bian.

In fact, Baru said Limbang will prosper due to the 175-kilometre spur roads which will be built under the Sarawak-Sabah Link Road (SSLR) project.

Once completed, he said the spur roads will connect Long Semadoh, Ba Kelalan, Bario, Long Pasia and Nanga Medamit in Limbang that will ensure that Limbang town will still be in the loop.

“We must be aware too that in fact there is a highway from Muara (in Brunei) direct to Temburong. If we have no other access to Limbang, then it will become a ghost town.

“I don’t think many people are aware of this. Because of that, the spur roads that we are going to build from Ulu Limbang to Nanga Medamit connecting Limbang (town) will be the access in the future, (thus), Limbang will still be in the loop,” Baru said in an interview after launching SSLR Package 1 at Long Sebangang/Bukit Berikau here yesterday.

The spur roads are part of the SSLR project which will be implemented under the second package of the project along with the 160km road from Pa Berunut to Long Lama.

In noting that Limbang will prosper because of tourism and ecotourism, he said the town has tourist attractions such as Gunung Buda National Park which is located very close to Nanga Medamit.

“I know that area very well. I travelled that area when I was in primary school to Long Napir. So, that would open up because this spur roads connect Nanga Medamit, passing Gunung Buda (National Park). I tell you that will be of a great potential to the people of Limbang,” he said.

“It is not replacing Phase 2 (of Pan Borneo). When we are capable, when the economy of the country has been recovered, we will continue. The maintenance of the road (Pan Borneo) however will continue,” Baru added..

Besides, Baru said there is already a road linking Miri through Brunei to Limbang and Lawas at the moment which is still “okay”.