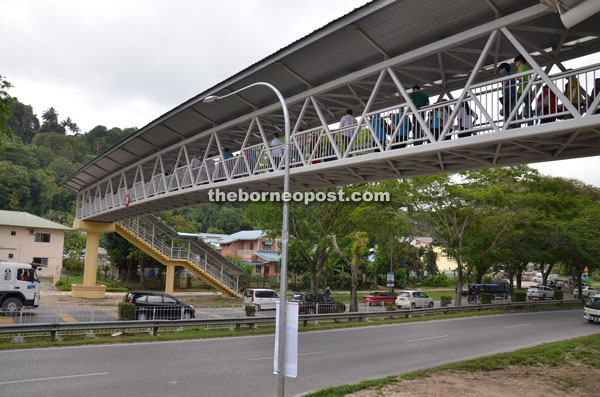 Members of the public using an overhead bridge in Kuching. File Photo

Assistant Minister of Infrastructure and Ports Development Datuk Julaihi Narawi said the bridges were to be erected from Boulevard Shopping Mall to Ambank across Jalan Datuk Tawi Sli and from Everrise Departmental Store to the 688 outlet across Jalan Datuk Amar Kalong Ningkan.

“Jalan Tawi Sli and Jalan Kalong Ningkan are federal roads. The proposals to construct the overhead bridges were not approved by the federal government under Rolling Plan 4 of the 11th Malaysia Plan (11MP),” he said when responding to a question from Lo Khere Chiang (GPS-Batu Kitang).

Julaihi said there is a necessity to construct both overhead bridges due to their locations being near to busy commercial centres and many residential areas.

“Moreover, the area is experiencing heavy traffic congestion as this road is one of the exit routes of Pan Borneo Highway from Kuching to Padawan area,” he said.

He said the state Public Works Department will put up the proposals again under the 12th Malaysia Plan for the federal government’s consideration.

According to Julaihi, the two proposed overhead bridges are 32 metres in length and estimated to be RM5 million each.

“We hope the federal government especially the Ministry of Works will approve (them), since the overhead bridges are important because we consider public safety as one of our priorities,” he said.